MY GRANDDAUGHTER IS STUCK IN HAITI ! 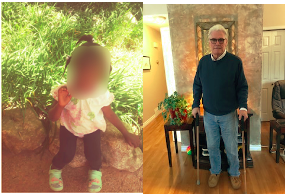 Beaumont, Alberta — 30 — Mark Davis Pickup needs to get his new 4-year-old granddaughter out of a Haitian orphanage caught amid violence, natural disasters, social chaos, and heavily dysfunctional government that has gripped the nation.
The disabled grandfather (MS) of five wants his new granddaughter to escape to the safety of his family in Canada.  His granddaughter was abandoned at birth on a street in Haiti’s capital Port-au-Prince and has lived all her life in a Christian orphanage. Her natural parents are unknown.

Mark stated, “I need the red-tape cut in Haiti and Canada to give her an expedited flight out of there. We don’t need financial help; we need cooperation of all governments involved to get my granddaughter out of Haiti safely and quickly, very quickly!”
On the morning of August 14th, a 7.2 earthquake struck Haiti, bringing down thousands of homes and buildings. The death toll is nearly 2,200 and rising. Many people are still under rubble or unaccounted for. Mark commented, “Fortunately, the orphanage where my granddaughter is located is okay and no lives were lost.”  Violent gangs have been terrorizing the population and blocking roads needed to transport vital supplies. Covid is also an issue. To top it all, tropical storm Grace hit Haiti on the heels of the earthquake, triggering flash flooding and landslides. Haiti’s President Jovenel Moïse was assassinated in July increasing the level of social breakdown and chaos. It all complicates getting Mark’s granddaughter out of the country.

Mark’s goal is to get an emergency flight for his granddaughter, and other children at the orphanage in similar situations who are separated from their adoptive families. Any remaining red tape needs to be cut, or dealt with after arriving in Canada or the U.S.. Mark stated: "The situation in Haiti is dire! Danger to my granddaughter increases each day."

The Adoption Unit within the US Embassy, Port au Prince, Office of Children’s Issues has issued a travel advisory for adoptive families to reconsider plans to go to Haiti. They stated, in part:

“Haiti’s current Travel Advisory is Level 3; Reconsider Travel, due to crime, civil unrest, and kidnapping. Travelers are sometimes targeted, followed, violently attacked, and robbed shortly after leaving the Port-au-Prince International Airport. According to press reports, one such incident led to the recent tragic murder of travelers.

A humanitarian flight has been offered to fly into Haiti to get Mark's granddaughter and other matched children at the orphanage. Because the situation is so dangerous with gang violence—and a gang is blocking the road from the orphanage to Port au Prince—Mark is asking for an armed escort to accompany his granddaughter and other  children matched with Canadian and American families from the orphanage to the Port au Prince airport to fly to Miami or Montreal. “My granddaughter is in increasing danger, as are other adopted children. I want my grandchild safely in the loving arms of her forever family, including my wife and me. She will be given every chance to rise to her full potential as a Canadian citizen.”

Posted by Mark Davis Pickup at 9:23 AM