"Now Mary arose in those days and went into the hill country with haste, to a city of Judah, and entering the house of Zacharias and greeted Elizabeth. And it happened, when Elizabeth heard the greeting of Mary, the babe leaped in her womb; and Elizabeth was filled with the Holy Spirit. Then she spoke out with a loud voice and said, "Blessed art you among women, and blessed is the fruit of your womb! But why is this granted to me, that the mother of my Lord should come to me? For indeed, as soon as the voice of your greeting sounded in my ears, the babe leaped in my womb leaped for joy. Blessed is she who believed, for there will be a fulfillment of those things which were told her from the Lord." (Luke 1.39-45) 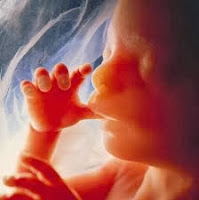 In this tender and revealing passage of holy Scripture we are given, among other things, a divine glimpse into God's view of the child developing in the womb: In this case John the Baptist in utero. It is clear that God is present with him before he is born and that he responded to the spiritual state of joy at six months gestation (see Luke 1.36). He was human: And in a primordial way, was aware of God's presence with him in his mother's womb!

Liberal Christians who want to support abortion may say that  most abortions occur in the 1st and 2nd trimester of pregnancy and John was more than six months gestation when this happened; the time the angel told Mary of Elizabeth's pregnancy until the two met would have been quite some time with primitive modes of travel. [1] I have heard this rationale. 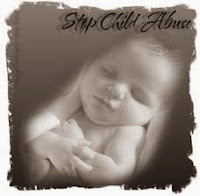 Liberal skeptics often say that unwanted unborn children will be abused. They don't know that. Do they really think that children who were wanted during pregnancy are never abused? Do you know that God himself addressed this issue?

"Can a woman forget her nursing child, and not have compassion on the son of her womb? Surely they may forget, yet I will not forget you, see I have inscribed you on the palms of My hands; ..." (Isaiah 49.15-16.)

The inscription of unwanted unborn children (and every other unwanted human being) are made on the palms of the hands of God-made-man by the nails of the cross. 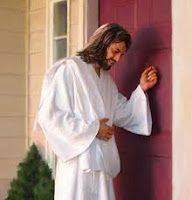 That is how much value we all have to God. That is why He came to earth. Let us leap for joy like the unborn John within Elizabeth's womb when we sense the presence of Christ is near.

"Heresy - HAIRESIS denotes a choosing, choice (from haireomai, to choose); then that which is chosen, and hence, an opinion, especially a self-willed opinion, which is substituted for submission to the power of truth, and leads to division and the formation of sects, Gal.5:20 (marg., "parties"); such erroneous opinions are frequently  the outcome of personal preference or the prospect of advantage ... ." Yup, that pretty much sums up Catholics for Choice.

Posted by Mark Davis Pickup at 9:51 AM