MAKING TIME FOR THE INTERIOR SELF

See Mark Davis Pickup's latest short personal blog post encouraging nurture for the inner self. Go to http://markpickup.org under "Cold and Quiet Canadian Winters"
Posted by Mark Davis Pickup at 9:05 AM No comments:

MEDIA COVERAGE OF MARCH FOR LIFE WAS MISSING SOMETHING

The 2013 March for Life in Washington DC marked 40 years of abortion on demand in the United States: It broke all previous attendance records with an estimated 500,000 people. Did you notice something about the meagre media coverage of the event? The absence of the word "life". As usual the liberal media are trying to couch the debate to show abortion supporter in a positive light. Liberal abortion advocates do not like the term "pro-life" because it implies they are pro-death. Yes, that pretty much sums it up -- if the shoe fits.  Let me strip away all the flowery or deceptive language and put the issue in raw blunt words.

Pro-choicers support the choice to kill unwanted or inconvenient unborn children to solve what amounts to social problems of their parents. Am I wrong?

For more information on the media censoring of the word life from coverage of the 2013 March for Life in Washington D.C. go to http://www.lifenews.com/2013/01/25/networks-censor-word-life-from-march-for-life-coverage/ , "Networks Censor Word from March for Life Coverage."

MDP
Posted by Mark Davis Pickup at 10:33 AM No comments:

As was mentioned in the last blog post (found below this post), it has been forty years of unrestricted abortion across the United States under the infamous Roe v. Wade Supreme Court ruling. It proved that even a nation’s highest court can make the lowest of decisions.
The January 2013 edition of the magazine Columbia published by the Knights of Columbus deals with abortion in America. Supreme Knight, Carl A. Anderson, wrote an excellent column entitled “Our Moral Responsibility”. He stated that it is not possible for any legal system to hold up human rights if it supports the principle that it is acceptable to kill the most innocent members of society. Anderson then wrote: “Roe v Wade not only accepts this principle, but it elevates it to a constitutional right.” He said that “no person is entitled to claim absolute control over another human life already called into existence.”

The truth of Mr. Anderson’s pen cuts with the precision of a freshly sharpened knife. Think about it. Wasn’t that the same moral position that ultimately stopped slavery in Aerica?
It was odd that the most pro-abortion President America has ever known was inaugurated for his second term on Martin Luther King Jr. Memorial Day (January 21st 2013). The great civil rights leader's immortal speech I have a dream still rings the bell of liberty 45 years after his assassination.

The root of that speech drew upon the foundational principle upon which America was founded: "I have a dream that one day this nation will rise up and live out the true meaning of its creed: "We hold these truths to be self-evident: that all men are created equal." Dr. King dreamed of a day when black Americans would truly stand as equals with white America and that they would not be "judged by the color of their skin but the content of their character." That dream is coming to pass as a black American has risen to the highest Office in the land. But that President sullies the dream of Martin Luther King making it once again incomplete and corrupted: This black President believes in a different kind of human oppression and inequality of a class of humanity: the unborn.

And so Dr. Martin Luther King's niece has risen up to carry the torch for human equality. Dr. Alveda King speaks for the lives of unwanted children being sacrificed on the altar of so-called sexual freedom of their parents. There is nothing free about it ... it is the children pay the price with their lives before they ever see the light of day or feel the sun's warmth on their backs! I am so grateful another member of the King family again points the way for the nation when it is falling so terrible short of its potential. Alveda King is calling America to recognize its blind spot about abortion. Liberty can not live without human equality. America is far from that noble ideal as long as abortion clinics operate and prosper across the land. 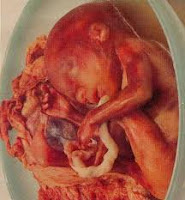 Understand the scale of human oppression and slaughter: since 1973, over 54 million preborn American children have lost their lives at a rate of over 4,000 each day. The abortion industry churns on day after day all across America aborting babies and preying on vulnerable and frightened young women in crisis pregnancies.

It does not need to be that way.

Americans of good will must welcome women in crisis pregnancies into their homes, churches and communities. Welcome their babies into your spheres of abundant nurture.  Shut down the abortion clinics in your towns and cities. Peacefully rise up in righteous indignation against this evil of our age. Do not rest until all human life -- from the spark of conception to the last breath of life's natural conclusion -- receives the care and protection it deserves as valued members of the human family.
Remember Martin Luther King's dream: "I have a dream that one day every valley shall be exalted, every hill and mountain shall be made low, the rough places will be made plain, and the crooked places will be made straight, and the glory of the Lord shall be revealed, and all flesh shall see it together."
"... This will be the day when all of God's children will be able to sing with a new meaning, "My country, 'tis of thee, sweet land of liberty, of thee I sing. Land where my fathers died, land of the pilgrims pride, from every mountainside, let freedom ring."
Alveda King, take the torch of liberty from your uncle's fallen hand. Renew his dream of human equality and liberty -- this time for the smallest voices yet to sing and breath. Call your countrymen to make rough places plain and crooked paths straight. America's blood-stained soil can yet be washed clean with the tears of national repentance. The glory of the Lord can be revealed. And I will pray for you from far away. I have such love for America.
MDP

Posted by Mark Davis Pickup at 7:52 PM No comments:

Yes, it is true: America made a grave mistake by re-electing Barack Obama. What's done is done.

The question is what do American Christians do now? Take for granted that the media will support whatever he does and even suppress the truth for their man.

Support the President for the good and life affirming things he does. Pray for him. We are under Scriptural command to pray for our leaders. Pray for yourselves too. Pray that God gives you discernment and wisdom and courage. So much is at stake.

Do not be afraid to clearly and resolutely articulate those things Obama and his Administration do that are offensive to freedom (not licence) or are clearly an offense to God -- like abortion. America's soil has been polluted with the blood of more than 55 million unborn children killed by abortion.* It is a time when darkness is presented as light. Christians must speak up like never before, Evangelicals and Catholics united together to stop this unprecedented holocaust!

Protest en masse against abortion and euthanasia. Take this holy battle to end abortion to the streets of your cities and towns. If it is at all possible, go to Washington and participate in the March for Life marking the 40th Anniversary of the horrible Roe V. Wade decision that opened the path to abortion across the land. Show up in such large numbers that the streets of Washington become clogged and the business of the Capitol is brought to a halt. Make so much noise with loud protests of righteous indignation that the halls of Congress shake to their foundations. If you can't make it to Washington, flood the offices of your representatives and senators in Washington and the office of  Supreme Court Chief Justice with emails, faxes and telephone calls marking the occasion of January 22nd.

Speak for the 55 million children who had no voice and those who are about to die!

*Canada's soil is bloodied by abortion too.
Posted by Mark Davis Pickup at 4:26 PM No comments:

WHAT HAVE WE LEARNED ABOUT INJUSTICE OVER THE PAST 156 YEARS?

In his excellent (although vaguely anti-Catholic) book THE MARKETING OF EVIL: How Radicals Elitists, and Pseudo-Experts Sell Us Corruption Disguised as Freedom, David Kupelian wrote about the Dred Scott Supreme Court case of 1857. The Dred Scott decision denied blacks American citizenship and even questioned their full personhood. Kupelian laid out the case and quoted Supreme Court Chief Justice, Roger B Taney who wrote for the high court majority that blacks have “no rights which the white man is bound to respect; and that the negro might justly and lawfully be reduced to slavery for his benefit. He was bought and sold and treated as an ordinary article of merchandise and traffic, whenever profit could be made by it.” Kupelian asked how the dreadful decision by the U.S. Supreme Court could get around the Declaration of Independence which affirmed that “all men are created equal”? Kupelian quoted Taney’s rationale: “It is too clear for dispute, that the enslaved African race were not intended to be included, and formed no part of the people who framed and adopted this declaration.”


Today, we look upon the Dred Scott Supreme Court decision with horror and disgust. And so we should. But we must not be so pious. Future generations will probably look back at the Roe v. Wade 1973 abortion decision with equal horror and disgust. And so they should. It was a barbaric decision by the highest court in the United States that was responsible for over 45 million abortions throughout the past 40 years! Each day across America more than 4,000 unborn children are sacrificed of the altar of sexual freedom for their parents.

In my country of Canada, the Supreme Court has decided that unborn children are not legal persons until birth ─ despite mountains of medical and biological knowledge about the humanity of prenatal life. And every Canadian abortion is paid for by tax dollars. Unborn children in the United States and Canada can be aborted throughout all 9 months.

If any place deserves God’s punishment, it is North America where these atrocities go on day after day, year and year, decade after decade.

Posted by Mark Davis Pickup at 7:40 PM No comments: