A Culture of Life is nurtured by love 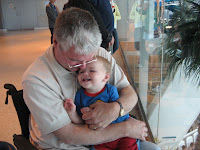 Read Mark Pickup's latest blog entry "A Culture of Life is nutured by love." at http://markpickup.blogspot.com
Posted by Mark Davis Pickup at 9:23 PM No comments:

The greatest and most urgent cause of the 21st Century!

Read Mark Pickup's latest blog entry for 29 April 2008, "The greatest and most urgent cause of the 21st Century." Go to http://markpickup.blogspot.com
Posted by Mark Davis Pickup at 10:21 PM No comments:

Reflections of my wife on life, disability and hope in God"

"How could Mark do this to me? How dare he get sick! He was supposed to be the strong one. I was the weak one! “Damn you,” I thought! I should be the one to have this disease. I could cope with it better. He was the one with most energy, I could accept this much more easily if I were the one! I could just slink away from the world. It would be okay. I was angry sad, bitter but most of all scared!" -- LaRee Pickup

Read the rest of "Reflections of my wife on life, disability and hope in God" at http://markpickup.blogspot.com

I watched CNN’s Compassion Forum with Democratic hopefuls Barack Obama and Hillary Clinton (what happened to the Rodham? I guess America’s not ready yet for a hyphenated President).

The auditorium at Messiah College in Grantham, PA., was filled with religious leaders such as William Shaw of the National Baptist Convention, Lisa Sharon Harper of NY Faith and Justice, Eboo Patel a Muslim sociologist with Interfaith Youth Core, Rev. Samuel Rodriguez, of the National Hispanic Association of Evangelicals, Dr. Frank Page, President of the Southern Baptist Conference, Reverend Rich Cizik of the National Association of Evangelicals, Jim Wallis of Sojourners, and David Gushee, professor of Christian ethics at McAfee School of Theology at Mercer University in Atlanta -- to mention a few.

CNN moderator Cambell Brown took questions from them all. Missing from the mix was a Catholic voice. I know the US Bishops were preparing for the Pope’s visit to America but surely one of Pennsylvania’s Bishops could have been present to ask a question, and make the Catholic presence felt. After all, there are over 60 million Catholics in America.

In fact, twenty-seven years years ago (April 23-24, 1981) a Senate Judiciary Subcommittee held hearings on the very question: When does human life begin? The testimonies from experts in medicine, biology and genetics from around the world was the same: Life begins at conception. For example, Dr. Hymie Gordon, Chairman of the Department of Genetics at the Mayo Clinic, said: "By all the criteria of modern molecular biology, life is present from the moment of conception." Dr. McCarthy de Mere, a medical doctor and law professor at the University of Tennessee, testified: "The exact moment of the beginning of personhood and of the human body is at the moment of conception." These and many other doctors were testifying under oath. If they were lying, they should be charged with purjury and misleading Congress of the United States. Of course they were telling the truth and Senators Clinton and Obama know this. They are playing with word games for the sake of political ideology.

THE FATHER OF MODERN GENETICS TESTIFIED ABOUT THE GENESIS OF LIFE

We also have the testimony of the legendary Dr. Jerome Lejeune -- known as "The Father of Modern Genetics". He also testified that human life begins at conception before the Louisiana Legislature's House Committee on the Administration of Criminal Justice on June 7, 1990.

Dr. Lejeune explained that within three to seven days after fertilization we can determine if the new human being is a boy or a girl. "At no time," Dr. Lejeune said, "is the human being a blob of protoplasm. As far as your nature is concerned, I see no difference between the early person that you were at conception and the late person which you are now. You were, and are, a human being."

Dr. Lejeune also pointed out that each human being is unique -- different from the mother -- from the moment of conception. He said,

“Recent discoveries by Dr. Alec Jeffreys of England demonstrate that this information [on the DNA molecule] is stored by a system of bar codes not unlike those found on products at the supermarket...it's not any longer a theory that each of us is unique.”

Senator Clinton said abortion should be safe and rare. After thirty-four years of abortion on demand in America, it's neither. As for safe abortions, I refer readers to do a Google search on "The Blackmun Wall." Read about women's deaths after abortion. Shocking!

Abortionists have left a sad trail of women with perforated uteruses and hemorrhaging across North America. As for abortions being rare, there have been over 40 million abortions in America since the infamous Roe v Wade Supreme Court decision of 1973! That's not rare, that's a holocaust!

There are over 1.5 million abortions each year in America. That’s the equivalent of more than 4,100 per day, 365 days a year. Is that rare to you?

In responding to a question about committing US troops to peacekeeping abroad, Senator Clinton used the opportunity to promote a favorite topic of radical feminists: Women's health issues. That's code language for promoting abortion to the developing world, and spreading the Gospel of death for unborn children afar.

Then it was Barack Obama’s turn on the stage. He’s come to no firm conclusion of when life begins or when the “soul stirs” -- yet he’s pro-choice. (Nothing like forming an opinion out of ignorance.) He’s another potential life ideologue.

At another point B.O. was asked about a statement he once made about not punishing his daughter with a baby. He clarified that his statement was made while addressing the question of sexually transmitted diseases. Hello, B.O.! STD’s don’t cause pregnancy, sex does.

Barack said he is a devout Christian and made reference creating a fair and just society and core Christian values. Sanctity of human life is a core Christian value. The audience sent softball questions to both candidates. Everybody was polite. Nobody even raised the issue of partial birth abortion which isn't abortion at all. It's heinous and despicable infanticide and it goes on across America. The blood of America's children pollutes the ground

The Christian leaders in the audience gave Obama a standing ovation. Meanwhile the holocaust continues. Shame ... shame. Christ called us to life not death.

(This blog has no visuals due to technical difficulties)
Posted by Mark Davis Pickup at 10:26 AM No comments:

"Providing ongoing care to an aging or disabled family member can be challenging and heartbreaking." Read Sandwiched between Generations by Mark Pickup at http://markpickup.blogspot.com/
Posted by Mark Davis Pickup at 9:33 AM No comments:

The power to choose

Speaking in Jonestown, Pennsylvania, Democratic presidential hopeful Barack Obama was surprised by a passionate question from the audience about abortion. Why would he be surprised? Abortion is tattering the social fabric of America. The usually verbose B.O. made short work of the question with a brief explanation of why “I’m pro-choice” then adjourned the town hall meeting.

Of course he’s “pro-choice” -- he wants to lead the Democratic Party.
Power over the powerless
Pro-choice. The choice to kill one’s offspring before birth -- or after birth if the child somehow makes it through gestation with an undetected disability. O Yes, disabled newborns are routinely allowed to die in hospitals across North America. Obama supports killing newborns that are simply unwanted. How do I know this? In 2002, Senator Obama voted against a Born Alive

Infant Protection Act to protect children born alive after a failed abortion attempt. The majority of abortions are performed on perfectly healthy babies. According to LifeSite News, B.O. argued that recognizing rights of unborn children would lead to equal protection of the preborn, and could legally prohibit abortion. Hmmm, that was strange reasoning coming from a man who would have been denied equal protection a few generations ago.
Wickedness of different generations

Many slave owners of the 19th Century would have argued against giving legal protection to somebody like Barack because it would lead to the abolition of slavery. It was the moral crisis that faced America during the 19th Century. Abortion is the great moral crisis of the 21st Century, and Barack Obama is on the wrong side of this moral crisis.

Abortion is as morally corrupt as slavery. It is rooted in the exclusion of a segment of humanity from the embrace and protection of the human family.

Being “pro-choice” is fine if the choice is between which college one should attend, what kind of car to buy or choosing a chocolate bar, but the power to choose death for another human being must never be accepted by any enlightened society. Those who favor or support such a terrible choice are unfit for public office, in the same way someone who espouses the choice to keep slaves is unfit for public office.

uman life is valued and protected, not into more darkness of ignorance, prejudice and violence where certain lives are devalued so that others can live as they wish.
The Oval Office that Obama covets is located in Washington, D.C.: the District of Columbia’s Motto is Justitia omnibus (Justice for all). That's Justice for all -- not just some. If you can’t grasp that concept, Obama, you should not lead the United States, perhaps the greatest nation to ever exist. America's 44th President must bring more light not more darkness to the land at this critical juncture in history. If you can not turn toward the care and protection of all human life, I pray the American electorate will not give you the keys to the Oval Office.
Mark Pickup
Posted by Mark Davis Pickup at 8:29 PM No comments: