Next blog posting will be Tuesday October 2nd 2007. Thanks and check back.

A few years ago I heard about "Catholics for Choice" regarding abortion. There’s even an organization called Catholics For a Free Choice (CFFC). I found their website at http://www.catholic4choice-canada.ca/.[1] The website stated:

“We are pro-choice Catholics who can speak up for reproductive rights and for the primacy of conscience. The position of the institutionalized Catholic Church on abortion and birth control does not reflect the moral beliefs of most of its members. Notwithstanding this, the Catholic Church seeks to impose its views on public institutions and in the law and public policy of this country and Internationally. It is essential that a pro-choice Catholic group exists, in order to demonstrate that the Catholic Church hierarchy does not reflect the majority view of “Catholics in the pew.””
Counterfeit Catholicism

My first thought after reading such audacious statements was that the tone was wrong. There’s something false and counterfeit to a historic Christian mindset! The diatribe carrie

s an attitude of divisiveness and rebellion contrary to the fruits of true Christian love and charity. The Catholic prohibition of abortion has remained unchanged throughout two thousand years. Abortion was condemned beginning in the first century (see Catechism of the Catholic Church. No. 2271). According to Canon Law (1398), abortion is such a serious sin against human life, dignity and freedom that the person who procures it is automatically excommunicated (latae sententiae). It would seem that the modern term “pro-choice Catholic” is an oxymoron.

Catholics For a Free Choice claimed that most Catholics do not agree with Church teaching on abortion and birth control. That’s quite a claim! How did they know that? Were the world’s 1-billion Catholics polled, or even Canada’s 12.4-million Catholics surveyed? No, of course not. It’s wishful thinking. Catholics for a Free Choice wanted to believe their puny organization speaks for Catholics more than the Vatican and its bishops (what CFFC refered to as “institutionalized Catholic Church” and its “hierarchy”). Call it what you wish, there is only One, Holy, Catholic and Apostolic Church: They are the four marks of the Church. There is no fifth mark called pro-Choice.
Heresy means choice
It should be noted that by definition the word heresy means "choice." Protestant Biblical scholar W.E. Vine’s famous Expository Dictionary of New Testament Words (1981) defines Heresy thus:
“denotes (a) choosing, choice (from haireomai, to choose); then, that which is chosen, and hence, an opinion, especially a self-willed opinion, which is substituted for submission to the power of truth, and leads to division and the formation of sects;…”
The Eastern Orthodox Church says,
“By definition heresy means "choice," and a heretic is one who chooses what he wants according to his own ideas and opinions, selecting certain parts of the Christian Tradition while rejecting others. By his actions, a heretic not only destroys the fullness of the Christian truth but also divides the life of the Church and causes division in the community." (http://www.oca.org/OrthFaithPrintable.asp?ID=6
The Catholic Encyclopedia online states this about heresy:

“The subject-matter of both faith and heresy is, therefore, the deposit of the faith,
that is, the sum total of truths revealed in Scripture and Tradition as proposed to our belief by the church. The believer accepts the whole deposit as proposed by the Church; the heretic accepts only such parts of it as commend themselves to his own approval.”
(http://www.newadvent.org/cathen/07256b.htm#REF_I.)

The “sum total of truths revealed in Scripture and Tradition” includes Church teaching against abortion. Its position comes from revealed truth not public opinion, majority votes or wishful thinking of dissenters like Catholics For a Free Choice..

What attracted me to Catholicism is its clarity. Catholicism is not a buffet of ideas for people to pick and choose according to personal preferences or individual opinions. It is the repository of Christian truth. Some pluralist may shrug and say, “What is truth?” Don’t go there—Pilate already asked that question (John 18.38) even as he looked at Truth incarnate (John 14.6.).

Authentic Christianity demands our first allegiance. It must colour all we do and say. Genuine vital Christian Faith is not a private matter to be kept behind closed doors hidden from public view. Just prior to His ascension, Jesus said:

“Go, therefore, and make disciples of all nations, baptizing them in the name of the Father, and the Son, and the holy Spirit, teaching them to observe all that I have commanded you. And behold, I am with you always, until the end of the age.” (Matthew 28.19-20. Also see Acts 1.8.)

What did Jesus command? He said, “This is my commandment: love one another as I love you.” (John 15.12). He repeated it again in verse 17. And how does Jesus love us? Inclusively! His love extends to all humanity throughout the ages, in every state of the human condition, and stage in the life spectrum. To deny this is to deny Christ’s boundless love. To deny this is to reject the “sum total of truths revealed in Scripture and Tradition”. And that would be to deny one’s Catholicism.

Catholicism is not a buffet of doctrines from which real, authentic Catholics can pick and choose whatever they like and discard the rest. There’s no such thing a pro-Choice Catholics.
Mark Pickup
[1] A recent Google search of this website drew a blank.
Posted by Mark Davis Pickup at 6:59 PM No comments: 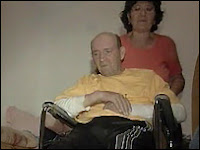 [1]René Descartes, Discourse on Method, (1637).
[2] Peter Singer, “Sanctity of Life or Quality of Life?” Pediatrics, July 1983, pp.128-129.
[3]Steven Ertelt, “Terri Schiavo’s Father Reacts to Woman in Vegetative State responding,”, LifeSite News, September 10, 2006. http://www.lifenews.com/bio1760.html
[4] Brave New World was the title of a 1932 novel by Aldrous Huxley about a fabled world based upon a scientific caste system. Human beings were graded from the highest intellectuals to the lowest manual workers.
Posted by Mark Davis Pickup at 9:32 AM 1 comment: