ALL CHRISTIANS ARE INDISPENSABLE TO THE BODY OF CHRIST

“Just as a body, though one, has many parts, but all its many parts form one body, so it is with Christ. For we were all baptized by one Spirit so as to form one body—whether Jews or Gentiles, slave or free—and we were all given the one Spirit to drink. Even so the body is not made up of one part but of many.

The eye cannot say to the hand, “I don’t need you!” And the head cannot say to the feet, “I don’t need you!” On the contrary, those parts of the body that seem to be weaker are indispensable, and the parts that we think are less honorable we treat with special honor. And the parts that are unpresentable are treated with special modesty, while our presentable parts need no special treatment. But God has put the body together, giving greater honor to the parts that lacked it, so that there should be no division in the body, but that its parts should have equal concern for each other. If one part suffers, every part suffers with it; if one part is honored, every part rejoices with it. Now you are the body of Christ, and each one of you is a part of it.”

Every believer has an indispensable role to play in God’s plan. You may not think so, but you do. Everyone has something, a role, a ministry, a talent, to offer in building the Church and spreading the Gospel. It may not be a front-line ministry, or in leadership but God has something He wants you to do. Perhaps your ministry does not win the applause of singers or musicians on stage each Sunday. Your contribution to the Kingdom of God might not receive resounding “Hallelujahs” of the congregation approval at the profundity of a speaker’s words. Your contribution may in fact be behind the scenes and out of the public eye. Perhaps a believer is a janitor and thinks he’s never even noticed.  But his supportive contribution is crucial to the operation of the church.

I am reminded of the mayor of a major city who was being interviewed for a news story. The reporter referred to him as having the most important job in the city. The mayor stopped the reporter and said something to this effect: “Do you know who’s really important to the operations of this city? Garbage collectors. If I don’t come to work for a month it will scarcely be noticed. But if the garbage collectors don’t go to work, it will be noticed by everybody within a week.” Wow. He put things into perspective.

Saint Andre Bessette (1845-1937) was a lay brother of Holy Cross in Montreal. He was plagued with poor health throughout his life. All he ever became was a porter at College Notre Dame in Côte des Neiges, Quebec. His lofty superiors did not see the holiness of the little brother in their midst. He was barely five feet tall, yet he was a spiritual giant. Despite being a porter for 40 years, his powerful prayers healed thousands of sick people. Word of his spiritual gift of healing became well known and crowds came to his door. Jealous superiors at in the Congregation of Holy Cross were sceptical and local doctors called him a “quack.” In the end, the humble little brother was receiving 80,000 letters a year and needed four secretaries to handle them. God puts us right where He wants us to serve the Kingdom of God.

Don’t wish you were more talented or gifted in different areas than where you have been given a calling. That’s like a frog wishing he wasn’t green. God made you just as you are, and He has a purpose In His design for you.

Posted by Mark Davis Pickup at 3:22 PM No comments:

A GRANDFATHER'S LOVE IS FOREVER AND EVER 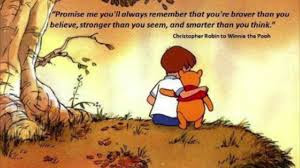 One day, when my grandson was four years old, we were exploring nooks and crannies, playgrounds and trails, in our little town. Some dark clouds appeared so he climbed on my lap and we hurried home on my wheelchair just as it started to rain. He and I watched the Disney movie "Pooh's Grand Adventure." My little guy sat in a big comfy chair eating popcorn. He did not know his family was going to move away from Grandma and Papa’s little town. My heart was heavy. The song 'Forever and Ever' began to play and I got a lump in my throat. It made me sadder. I did not want him to move away but it had to be. The day he moved away was the same day my mother (his great-grandmother) died. I don’t think the world ever felt so lonesome as it did that day. I wanted to always call his name and hear his voice answer. It was not to be.

Now he has grown to be a man. But no matter where he goes in the world, he knows his Grandmother and I are still in our little house. A candle is always burning in the window for him and his younger siblings.

I am old now. Everything is simple again. Rhythms of life are becoming gentle, seasons pass and a nearby church bell still rings each day, just as it has for over a hundred years. Each night when I get into my bed and turn out the lamp, I still dream he, and my other grandchildren will come back to stay. And though it is unlikely, love for my family is forever and ever. -- MDP

Posted by Mark Davis Pickup at 9:15 PM No comments: