A LOVE THAT IS, THAT IT IS 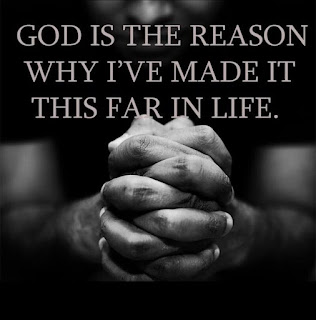 I read what someone wrote on LinkedIn about the poster above: “God has been God for a very, very long time.” He meant well, but I think there is a flaw in the writer’s thinking. It’s not that God has been God for a long time, He created time and operates outside of time. God always was. But even this sentence is foolish because the words "always" & "was" acknowledge time and can only make sense within the context of time.

We cannot comprehend something existing outside of time because a world of time is all we know. In my pea-sized brain, I will make an analogy. Christ's disciple John said God is love. (1John 4:8-9). How much time does love occupy? How much time does an idea or thought occupy? The essence of love, and an idea are not expressed in time, only the thought of love or thinking the thought occupy a tiny span of time. In and of themselves, love, or an idea, transcend time. To ask, "How much time does love occupy?" is a non-sensical question. It is unanswerable. In his remarkable little book, A Grief Observed, C.S. Lewis addressed this: "Can a mortal ask questions which God finds unanswerable? Quite easily, I should think. All nonsense questions are unanswerable. How many hours are in a mile? Is yellow square or round? Probably half the questions we ask - half our great theological and metaphysical problems - are like that."

In fact, I would go as far as to say, the things that matter most in life exist and operate outside the confines and limits of time. I have lived most of my adult life with serious degenerative disability (MS). The most unanswerable question in terms of my suffering is Why? After 38 years asking that question, I have begun to understand that the answer behind my every Why is the love of Christ. Divine love exists on another dimension that's not governed or subject to time. It is inexpressible, unfathomable. It simply is. I can express it another way: love is that it is.

When I united my suffering with His salvific suffering on the cross, I discovered that I briefly entered an anteroom of the timeless, too wonderful to endure in my present (or present state) other than for a brief nano-second. In that brief whisper of bliss—which entered a moment in time to be expressed to my time-boundedness—suffering and creeping paralysis no longer mattered. All that mattered was/is God’s divine love.

This Divine love enters time for the sake of our earthly reality to benefit of you and me, but it comes from far beyond us. Its home is eternity which is outside of time. If I analyze it, love in its purest form seems to straddle both time and the timeless. My heart aches because it cannot take it all in—the smallness of my human understanding and my gigantic imperfection is yet incapable in this world, only the next. Then, I will understand just as I'm understood. The Apostle Paul said, "Now I know in part; then I shall know fully, even as I am fully known” To know and be known transcends time.

There was a sense of an eternal timeless reality—the only reality that ultimately matters—in Jesus' words, “Before Abraham was born, I Am.” (John 5:58) Jesus existed in the essence of the Godhead with and in His Heavenly Father before the world of time and space existed (See John 17.5 & 24). The Incarnation brought Jesus into the world of time and space.  At Christ’s ascension, he stepped back into the timeless reality of eternity, just as all will who have given their lives to Him.

But what do I know, I'm a foolish old man.

Posted by Mark Davis Pickup at 1:50 PM No comments:

DISABILITY INCLUSION: SO FAR AND YET ... SO FAR!

Throughout my life (even before I was disabled with MS) I promoted disability inclusion. Many people have a hard time seeing people with disabilities (particularly visible disabilities or mental disabilities) as equals within normal society. Even progressives who pride themselves as inclusive have difficulty with this concept. They may say they don't, but they do. They make artificial gestures for token examples of disability inclusivity, but I always have a well-founded suspicion they are tokens and artificial. If it was otherwise, Canada would not fund and support assisted suicide by lethal injections for the disabled & terminally ill, while promoting suicide prevention amongst the healthy population. Canada's workforce would naturally tend to mirror the percentage of qualified and ready disabled workers in the population. But it does not. NOT even close!

I've been disabled almost all of my adult life. My children & grandchildren were brought up with disability in the family. They are comfortable with withered limbs and twisted bodies and tools used by people with disabilities such as wheelchairs, adapted vehicles and adapted homes.

My wife and I taught them to see the person not their disability, to see abilities more than disabilities. That's genuine inclusion. (I've made many mistakes in my life but this was not one of them.) We did it before "inclusion" was a fashionable buzz-word. And I know we succeeded. Look at the photo below of my two granddaughters and me when they were little. Notice one is using one of my wheelchairs—as she often did—as a normal part of play. The other has a doll in a wheelchair. You see, It was as normal & natural as daylight to include disability in their fantastic world of imagination and play. 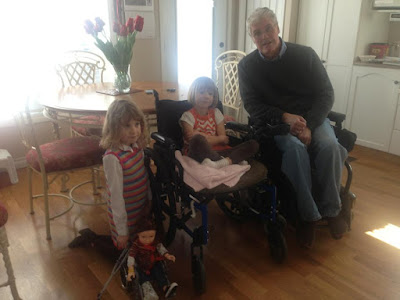 Posted by Mark Davis Pickup at 1:45 PM No comments: