CURRENCY OF THE SOUL 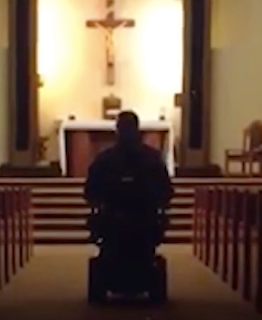 Decades of suffering with a degenerative disability (MS) caused me to deal in the currency of my soul. (It is what makes us human and defines who we are.) With God's leading, I was able to cross a raging river of grief to discover a new self. The old Mark was gone as surely as if I had died. I needed to grieve that loss and search for a new self and self-identity. A new Mark emerged—different to be sure—but no less alive or vital than the previous Mark. My soul answered Yes to the critically important question: Is life worth living, even in what seems to be hopeless circumstances?

Viktor Frankl was a survivor of Nazi death camps. In his remarkable book "Man's Search for Meaning" he wrote: "Life is never made unbearable by circumstances, but only by lack of meaning and purpose."

My wheelchair was like a prison that housed my broken body, but it also helped liberate me spiritually by driving me inward to deal with inner brokenness. I came to understand that my value is not connected to who I am, what I can do, or even my intelligence. It comes from simply being. Everyone has immeasurable value for no other reason than they were endowed with the indelible Image of God at the spark of life we commonly call conception.

Frankl also wrote: "If there is to be any meaning in life at all, then there must be a meaning in suffering." 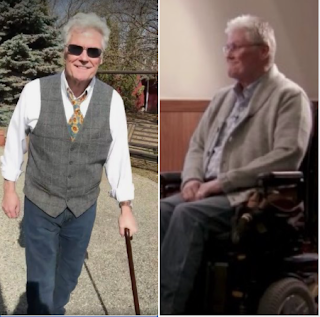 I will be seventy this year. Most of my adult life has been spent struggling with the anguish of multiple sclerosis and creeping paralysis.  In 2018, God unexpectedly raised me out of my electric wheelchair to walk again. What am I to make of it? My interior life is in full bloom. I have placed all of my life in His hands. I am finally willing to accept whatever is His will for me in 2023, and beyond. It is a peaceful place to be. That is the meaning that suffering gave to me. Happy New Year! — Mark

A MAGICAL CHRISTMAS MOMENT IN JULY 1957 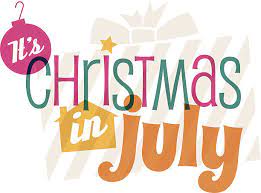 I was raised in a one-horse town in western Canada during the 1950s-1960s. Somewhere in my little grey cells rests an early childhood memory. It happened in the middle of July 1957.

The day was hot and still. My parents loaded my brother and me into their 1950 Chevy for a long bumpy trip to Edmonton (Alberta). They were meeting a wholesale representative from a toy company to buy Christmas stock for my father’s store. They didn’t breathe a word of it to my brother or me.

When we arrived in Edmonton, I remember walking down sweltering July sidewalks holding my father’s hand. (He told me that he needed to hold my hand so he wouldn’t get lost.) We went to a Canadian National Railway luxury hotel named after Canada’s first Prime Minister, Sir John A. Macdonald.  In all my four years I had never seen such grandeur.  (The Construction of the MacDonald Hotel began in 1911 in a distinctive 16th castle style of a French chateau.)  A doorman dressed in a Yeoman guard’s uniform ushered us into the lobby of the hotel. My father leaned down and whispered that the doorman must have been waiting for me. I looked around with wide-eyed wonder at the elegant surroundings. It was a mini-culture shock! Vivaldi quietly played over the intercom not Hank Williams on a jukebox singing “Howlin’ At the Moon”. There was no dust bane on the floors of this hotel. We walked down a magnificent long hallway with glistening marble floors under Persian runner rugs. Men wore well-pressed trousers and shiny shoes not Drayton Valley oxfords (rubber boots). Women in this hotel had all their teeth. People “dined” in a dining room and the menus had pages with entrees. A waiter in a tuxedo had a napkin on his arm. People in my town ate at the Wild Cat Café (without the aigu). The menu consisted of, well, wild cat – or so the locals suspected. The name of the waitress was Thelma and she wiped arborite tabletops with a rag that smelled of bleach. She chewed gum and sauntered up to customers to ask, “What’ll yous have?”

The Macdonald Hotel was a different world from what I knew. My family entered an elevator with shiny dark cherry wood panelled walls.  An elderly man wearing a MacDonald tartan blazer pushed a glistening brass handle and took us to our floor.

Have you ever noticed how irrelevancies can stick in peoples’ memories?  One of mine was passing a hotel housekeeper pushing a hoover vacuum cleaner with a small light near shining on the floor that did not have the slightest speck of dirt or lint. I remember thinking it must be a very clean hotel indeed. Then a terrible thought crossed my mind: What if my mother saw that vacuum cleaner! She might want one! Nothing would be left undisturbed in our house. My colony of earthworms under the rug in my bedroom would be doomed!

What do vacuum cleaners with lint lights and earthworms under a rug have to do with the story? Nothing. I digress. Back to the story.

We walked down a long hallway and stopped at a huge heavy door. My father knocked. The massive dark cherry wood door slowly and silently opened to reveal . . . Christmas! There before me was tinsel and Garland and Angel hair and a fully decorated Christmas tree declaring a magical world of Christmas—in July! The tree’s lights twinkled and blinked to welcome us. Music from Tchaikovsky’s Nutcracker was playing in the background. Rows upon rows of tables held samples of new toys for merchants to order. I looked up awestruck at my smiling father! He and the toy salesman laughed.

Every conceivable toy was laid out before me. Everything glittered, twinkled and sparkled in Christmas colours.  This was heaven to a four-year-old boy!

My dad picked me up to watch the elaborate precision of a toy train hustling through miniatures mountain tunnels, across trestles, into a little alpine village where tiny lights shone inside wee shops, a little church and tiny houses with snow-covered roofs.  A little gate rose and fell to stop little toy trucks and cars from crossing the tracks while the toy train whistled and chugged past. I felt like Gulliver in Lilliput.[1] I, the boy-giant Markus, watched the goings on of a magical miniature world, from his father’s arms.

Then, as though saving the best for last, the salesman opened another big door to an adjoining room. In there we found bicycles, tricycles, sleighs and a large assortment of outdoor toys! There was a salmon-coloured Dick Tracey pedal car with whitewall tires. It was just my size! And the toy salesman let me drive it back and forth down the hallway, right passed the housekeeper pushing the vacuum. Wow! In my mind, that toy salesman was promoted to the stature of Geppetto. [2]

But alas, all good things must come to an end. My father ordered his stock for the next Christmas and we left the grand old Macdonald hotel and entered the hot summer day. The magic of Christmas in July melted away. Everything was ordinary and commonplace again. 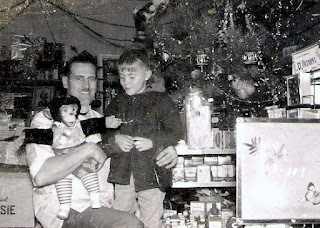 (My father & I in his store (December 1957) with some Christmas stock ordered the previous July.)

A little boy’s experience with Christmas in July was embedded into my memory and fondly remembered even into old age. 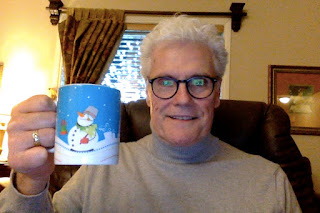 May this old man wish that sweet childlike joy and longing that lies in each of you a most blessed and merry Advent season. Here is a Christmas song for you. (Hope you like John Rutter.)

[1] Jonathon Swift, Gulliver’s Travels, 1726. A tale of Lemuel Gulliver who finds himself shipwrecked on the island of Lilliput inhabited by people only a few inches tall.

Posted by Mark Davis Pickup at 1:04 PM No comments: