It may seem that my past few posts have not had much to do with life issues -- at least on the surface. They do, however, deal with the overall richness in living. Perhaps this apparent departure in my usual writing is rooted in the festive Christmas Season that has captured my heart this cold and wintry Canadian December.

I came across an excellent video produced by the British Broadcasting Corporation (BBC). You will find a link to it at the end of this post. It's a ninety minute program entitled Bach: A Passionate Life. It was hosted by Sir Eliot Gardiner (featured in my previous blog post). He has  great knowledge about Bach's music and his life. His comments about Bach's personality are mere speculations based on little more than hunches.

Johann Sebastian Bach's music has been an important consoling influence in my 30 year journey with degenerative multiple sclerosis. At times, his music gave soothing articulation to my suffering, my pain and my grief in ways words could not. Bach experienced grief in his life and it is evident in his music. 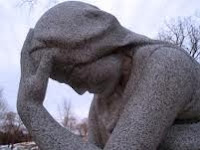 At one point in the BBC documentary Eliot Gardiner said that a composer "can channel all the frustration and disappointment into music and Sebastian's music has this wonderful and uplifting quality to it. Most of all, Bach's music offers us a balm of comfort in bereavement." This touches upon what I mean a consoling influence and soothing articulation of my anguish.

More than grieving the loss of physical function and health, at a certain point in my grief journey, I had to come to grips with a horrible reality. This reality was the realization that my previous self was gone as surely as if he had died. A new self could emerge -- if I would allow it -- and if I was willing to explore and develop that new identity and let it grow in Christ. The growth of that new self cut to the center of my humanity and helped to identify who I was/am and define and refine my destiny as a man and as a child of God.

Someone else in the program observed in Bach's music an "overwhelming exploration of what it means to be a human being." Bach's depth is breathtaking in breadth, scope and beauty! I am astonished and grateful.

It was at the apex of my own suffering that Saint John's Passion spoke to me in a profound way about Jesus' suffering, and my own. I did not need to put up my guard because I knew of the composer's profound Christian faith was in his music and that he too had experienced the bitter anguish of loss, although in a different context. It was while listening to music like this and immersing myself in God's word and prayer that I discovered Christ was inviting me in my suffering into His redemptive suffering!

A person in the video said this about Bach: "He speaks with the voice of someone whose faith is absolutely rock-solid. It goes right to the roots of his being." This is true for Saint John's Passion (1723) as well as Bach's later St. Matthew's Passion (1729).

Abundant life is the substance of what Christ wants for his followers through faith and a personal daily relationship with Him -- not only in the hereafter but in the present too. Jesus said, "I have come that they may have life, and that they might have it for abundantly."[1] The abundance of which our Lord spoke is a spiritual fulfillment in Him; it finds outward expression in our relationships with others and those things that make us grow spiritually such as healthy modes of expression in the arts.

There are many patterns and structures for this richness of life. The first is the Bible and worship of God through our relationships with Jesus Christ. For me, the second comes in the form of music and an intense personal culture (found internally and externally). This can cultivate growth and beauty within individuals and societies.

(If you are unable to connect to the video, click below
https://www.youtube.com/watch?v=UiQbppQq54E  )

[1] John 10.10. The prosperity gospel that polluted and  misled many North American churches during the 1980s and 1990s interpreted the abundant life Jesus to which Jesus referred to mean financial wealth. Some went so far as to use financial prosperity to measure the spiritual state of Christians. Happily the spiritual poverty of the prosperity gospel eventually fell into disrepute, although it still can be found in some fringe churches.
Posted by Mark Davis Pickup at 8:36 PM