TOWARD INCLUSION THIS CHRISTMAS—AND BEYOND 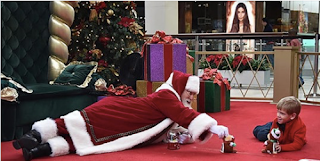 I came across this photo of Santa interacting with an autistic child. It nearly brought me to tears. For most of my adult life, I have worked for inclusion—particularly as it relates to chronically ill people, those with disabilities, and women in crisis pregnancies.

Inclusion! It just happens. It happens in small ways and small gestures that may seem insignificant yet make significant differences in the daily lives of people. Disability inclusion doesn't happen because of government programs (as helpful as they may be), legislation, or fashionable "progressive" thinking at any point in time. Real inclusion begins in the hearts of ordinary people. It is expressed in their places of work, their schools, their churches and neighbourhoods in cities, towns and villages all across the nation. Inclusion opens doors that were previously closed to relationships. Inclusion is interactive and changes a noun into a verb.

Inclusion embraces every member of the human family—born and unborn, the very old and the very young, every ethnicity, the abled and the disabled, the poorest and the rich, the addict, the homeless, the deranged, and those who are not even loved by anybody. Inclusive communities are life-affirming, never life-denying. They do not kill each other. There is no place for abortion, assisted suicide or euthanasia in truly inclusive communities. Inclusion involves a nurturing of minds and spirits of people. It cares. Authentic inclusion encourages people to rise to their full potential that God intended for them. Inclusion begins in the womb and ends at the tomb. It involves every stage and state of life between those two points. Inclusion is what it means to be PRO-LIFE.

Posted by Mark Davis Pickup at 1:43 PM No comments:

Dear Friend—A couple of years ago the liberal government of Canada under Justin Trudeau passed a law enacting the LGBT extremist gender ideology agenda that is having disastrous consequences. Bill C-16 adds “gender identity” and “gender expression” to Canada’s Human Right Code. This, in part, is effectively what the grossly misnamed Equality Act pending in Congress would do here in the United States.

Of course, the entire idea of “gender identity” is a made-up concept that does not exist in the real world in which we live. It’s a creature of the elites who have been seeking to impose it through indoctrination, intimidation and political correctness. In the real world, we live by a set of immutable rules that help define our physical reality – there’s a thing called gravity, the body requires food and water to survive, we must breathe to oxygenate ourselves, etc. One of those immutable rules in the real world is that each of us are born either male or female. Our sex is a biological reality that cannot be changed by identity, expression, desire or feelings.

Despite the utter incongruity of the concept of gender “identity,” the movement to impose it is powerful, well-connected and influential. Many people who disagree with it are not interested in publicly talking about the issue for fear of being labeled a hater. So, they quietly roll their eyes, go about their business and hope that it won’t affect them.

One group of people in Canada has quickly figured out how they can game the system and use the insanity of “gender identity” to serve their own interests. Male prisoners. Men in prison have caught on that the law allows them to declare a female gender “identity” and then assert their right to be housed in an all-women prison facility. That’s what many of them have done. And some of them are the worst criminals around – child rapists, murderers and sexual predators.

The reason the men are doing this is obvious: they want to force themselves upon the women inmates. And that’s exactly what they’ve been doing. A Canadian prison advocate recently told a media reporter, “They currently have three ‘trans’ inmates [at Grand Valley Institute (GVI) in Ontario], and I use the term 'trans' loosely here because they are openly telling the other female inmates they are not really trans. They are only at GVI to have sex with the females.”

Sadly, the response to this situation by prison authorities reflects the enormous influence that the LGBT community exerts over liberal institutions of government. The GVI Warden reportedly told the female inmates that those who have a problem with the situation “could go to psychology.” Prison advocates report that medical staff distribute the morning-after abortion pill to female inmates.

It’s understandable that some people may want to just keep their head down when it comes to challenging the advent of gender ideology, but that will only make things worse. Before long, the ability of men to force themselves on girls and women will be happening in every facet of society – schools, hospitals and medical clinics, intimate facilities such as showers and spas, development programs for girls, etc. We are already experiencing the beginning of this trend.

Even worse, if we don’t fight now while we can, this situation won’t be a trend, it will be federal law. The Equality Act (which we call the InEquality Act because of the one-sided way by which it imposes the LGBT agenda) has already passed the US House of Representatives. Every Democrat in the US Senate supports it (as does at least one Republican), and every candidate for president has endorsed it.

You can be sure of this: if the Democrats win the presidency and take over Congress, they will find a way to impose gender ideology on the American people. Having men worm their way into female prisons will be the least of our concerns then.

NOM is fighting hard to alert the American people to the dangers of gender ideology and the many problems that would be created if the InEquality Act becomes law. We’ve produced many communications about this issue and generated tens of thousands of grassroots contacts with members of Congress to oppose this agenda. But still, the legislation is pending in the Senate and could come up at any time... .

... It’s a crazy world that we live in these days where insane concepts like “gender identity” are taken seriously and advance at a rapid pace. But we can exert great influence and reverse this course if we all work together and have the courage to stand up and be counted.

Thanks for standing with us on this critical issue.

Brian S. Brown
President
Posted by Mark Davis Pickup at 11:47 AM No comments: