I wrote a column for a Canadian Catholic newspaper, The Western Catholic Reporter from 2004-2016 when the paper folded (a victim of many newspapers to new online media). One of my columns appeared under the title "Christian love gives dying souls peace." It dealt with 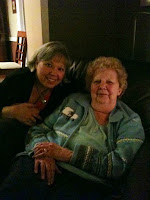 my wife's adamant and resolute protection of her mother (who had dementia) from being euthanized. My column appeared on October 28th, 2013. Her Mother died two months later. Less than 3 years later Canada legalized euthanasia under the euphemism "medical assistance in dying" in May of 2016.

Since that time, more than 30,000 Canadians have been murdered under the new law—the vast majority by lethal injection. The initial criteria of Canada's law have been slowly broadening. In March of 2023, the mentally ill will be eligible for assisted suicide. Evil advances incrementally to coarsen public acceptance for what was once unthinkable.

See my article below. If you are unable to read, the text is below the article. My wife, LaRee, and I were asked to address a conference about critical life issues sponsored by the Diocese of Metuchen in New Jersey. They wanted us to speak about a Christian perspective on suffering, disability and end-of-life care. It is a timely topic because New Jersey is considering a law to allow assisted suicide. The diocese wanted the dual perspectives of someone with a degenerative and incurable condition like multiple sclerosis (me) ― and the perspective of a loved-one (my wife) watching the deterioration and unable to stop it.  LaRee and I looked forward to going to New Jersey for two reasons. Firstly, we thought we could bring a needed life-affirming Christian story to the debate that is raging in that state, and secondly, we were going to celebrate our 40th anniversary after the conference in the nearby city of New York. It was not to be.

LaRee’s aged mother’s frail physical condition started to take a life-threatening turn in Edmonton. We could not risk being so far away from her. Once again, my wife is giving a profound witness by her actions for Christian care of those who are vulnerable and cannot care for themselves. We cancelled our trip.

My wife’s active love for others has been illustrated for more than half of her lifetime.

Her mother lives in a nursing home and has dementia; her confusion makes her frightened and she cries out for LaRee.  As soon as she enters her mother’s room, all is calm again because she knows she is safe with LaRee near.

It’s unfortunate, but my wife has deep reservations about anything that would put her mother in an acute care hospital setting. The threat of her mother being denied nutrition and hydration (food and water) is very real. LaRee’s grandmother met with that fate ten years ago and died a torturous death.  It happens to vulnerable people all the time. In this new bioethical era, the incurably ill, dying, and severely disabled are increasingly fearful of hospitals where some physicians ― with the full backing of a hospital ethics committee ― may decide providing treatment to them is futile.

Treatments may be futile but the patient is never futile. Doing anything to hasten the death of a sick or dying person is always wrong and flies in the face of a long tradition of Hippocratic medicine. That’s why I previously wrote that Catholic hospitals must never acquiesce to bioethical trends that do not recognize the innate dignity and worth of every human being regardless of their state or stage in life.

Whether or not physicians working in Catholic hospitals are Catholic, they must adhere to the principles of Catholic teaching. As a person with advanced multiple sclerosis, I want to know I can rest confident that medical decisions about my care follow those teachings.

The Catechism of the Catholic teaches that euthanasia is morally unacceptable (2277-2279). Any act of omission that causes death (like withholding food and water) is considered as murder and must always be forbidden. “Withdrawal of medical procedures that are burdensome, dangerous, extraordinary, or disproportionate to the expected outcome can be legitimate” If death of a patient is imminent “painkillers to alleviate suffering of the dying, even at the risk of shortening their days, can be morally in conformity with human dignity if death is not willed as either an end or a means.” In such cases, death is recognized as inevitable but not hastened. The underlying principle is one of motive and intent. Death must never be the intent of any medical action or inaction.

That is the ethic by which every Catholic hospital must operate its end-of-life care. They must always act in accordance with Catholic teaching on matters of life and death and never give in to trends in bioethics, secular pressures or financial burdens. If people like my mother-in-law (or me and you) cannot rely on Catholic care to always value our lives, where can go to know we will be safely treated?

I mentioned that my mother-in-law feels safe when LaRee’s is near. Even in her mounting dementia, she seems to know she’s in good hands. LaRee’s Christianity and familial love motivate her to stand in the gap for her vulnerable loved-ones. She recently combed through her mother’s advanced directive from 2009, and updated it to reflect 2013’s reality. She met with her mother’s treating physician to make sure every measure for comfort is met and ordinary care owed to all sick people is not interrupted (just like the Catechism says).

By caring for her mother in this way, LaRee is giving vivid testimony to a culture of life that treats dying as the last phase of living in which the bonds of humanity are strengthened, not weakened.