My 7 spiritual blessings found in suffering

The Cross and Resurrection of Jesus Christ (and how people respond to them) defines human destiny.

The illumination of the sickroom taught me that it is not suffering that destroys people, rather the bitter experience of suffering without meaning. My own experience with protracted suffering has come in the form of seven spiritual blessings:

1. Surrender. My first spiritual blessing came in the form of surrender: I asked myself how Jesus handled suffering. My answer came from Christ’s agony in the Garden. Luke tells us Jesus was in such agony and prayed so fervently that his sweat became as blood. Three times he asked that the cup of suffering be lifted from Him. He said, “Father, if you are willing, take this cup away from me; still not my will but yours be done.” (Luke 22.42). “Not my will but yours be done.” That’s the key. God wants us to totally surrender to Him, regardless of circumstances. That led to my second spiritual blessing:

2. Humility. Multiple sclerosis stripped away my foolish illusions of self-sufficiency and autonomy. It’s hard to be Proud and puffed up when I couldn’t even dress myself and had to get someone else to tie my shoes. Yes, at times I had to rely on others for simple personal, daily tasks. It mortified me and gave rise to honest, sometimes brutal self-examination. With my insidious Pride shattered, the light of Christ started to shine deep into my heart, and my love for Christ began to grow. And that paved the way for my third spiritual blessing of suffering.

3. Trust. Having a degenerative disease has given me the opportunity to trust God when the stakes were horribly high. The example of Christ’s Passion taught me that fear and pain sharpened my focus on Him.
4. Patience and perseverance: My 4th blessing found in suffering with my chronic disease helped teach me to patiently persevere. That has been my 4th spiritual blessing found in suffering. Long days, months and even years spent convalescing have encouraged these virtues (and boy do I need them). The silence of the sickroom gives context to the Scriptural exhortation: “Be still, and know that I am God.” (Psalm 46.10).

5. Faith: My 5th blessing found in suffering is that it teaches Faith. In so many ways, my Christianity was shallow and counterfeit and would likely have remained that way if it were not for the MS. Even in the midst of calamity and tragedy, however, I have learned that God abides with me.

6. Courage. My 6th spiritual blessing found in suffering is that it rouses courage in cowardly people, like me. Courage develops as we begin to understand that our hope lies elsewhere. Rather than cower in disease and defeat, I learned to strive confidently on in my journey toward the gates of the Celestial City.

Email ThisBlogThis!Share to TwitterShare to FacebookShare to Pinterest
Labels: Christian growth in suffering

Living and dying with dignity

Don Babey, executive director of Dying with Dignity said, "There are cases I'm aware of every day of people who are just in torture, and there isn't any legal mechanism in Canada today for them to be free of it." Balderdash!

There is a wonderful mechanism to deal with physical pain. It’s called palliative care. There is no need for people to die in agony in the 21st century. Either Mr. Babey is unaware of this, or he's misstating his case to bolster his agenda.

The head of palliative care at the Canadian University of Ottawa Medical School, Dr. John Scott, has said:

"The World Health Organization has demonstrated that access to pain-relieving drugs, along with a simple educational program, can achieve relief in the vast majority of patients. Specialists in various parts of the world estimate these basic approaches can control 85 to 98 percent of cases. The remaining cases require more careful attention and the use of multiple drugs and therapies to achieve complete relief. The technology and expertise to deal effectively with the problem of pain has already been developed. Poor pain relief, when it exists, can usually be traced to problems of education and resource allocation." [emphasis added] (Gentles, Ian, ed. EUTHANASIA AND ASSISTED SUICIDE: The Current Debate. Toronto: Stoddart Publishing, 1995, p. 96.)

I can personally attest to this: My mother died of cancer in July 2006. She had wide-spread bone cancer (notorious for excruciating pain). It spread to her lungs, brain and soft tissues. In short, she was riddled with cancer. Yet her pain was well controlled and she died peacefully, without pain, surrounded by the love and support of friends and family. This was achieved without putting her into a drugg induced mental haze. All this was done in a small Canadian prairie hospital under the care of a general practitioner who took the time and concern to stay current with the latest pain management techniques. Good state-of-the science of palliative care. If this can be done in a remote area out on bald Canadian prairies , why not major centers?

My journey with multiple sclerosis is slowly destroying me. Yet pain, nausea, spasms and many other unpleasant symptoms of MS have been well controlled. At an emotional level, my family has lifted me up as someone of value, even when I doubted my own value. Pain of the body is easy to control. It is heartache, emotional pain and agony of the soul that are not easy to allay. Love is the only antidote for that suffering.

There is no need for assisted suicide or euthanasia. There is a need for up-to-date palliative care to be available to all Canadians when they need it. If anyone is dying in pain in 2006, they need a new doctor. If doctors in Canada are euthanizing patients (as some people have suggested) they need to be prosecuted under Canada's Criminal Code. Our goal should always be to provide life with dignity not so-called death with dignity. People do not die with any more dignity than they live with. Dying with dignity is a process not an event. It is impossible to inject dignity into a person's bloodstream when they are at their lowest ebb. Any thinking 10 year old can figure that out.

The answer to pain of the heart and soul is not poison. It is found in love, understanding and acceptance. Give a man life with dignity and he will die with it.

Email ThisBlogThis!Share to TwitterShare to FacebookShare to Pinterest
Labels: euthanasia 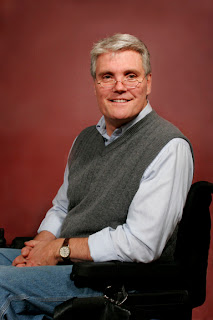 I have spent most of my adult life struggling with the incurable and disabling disease of multiple sclerosis. In the midst of internal and physical crisis, I had to find a point of reference for my mounting and inexpressible grief: I looked for it in the Cross of Christ.

Not only did Christ suffer excruciating physical pain, but he suffered emotional and spiritual pain that culminated in his cry from the cross: “My God, My God, why have you forsaken me!”
There is no lonelier human moment that being at the climax of suffering and crying out into a universe that seems indifferent to pain. Any evidence of God seems to have vanished. The events surrounding Christ’s Passion were a natural and logical point for me to try and make sense of my own suffering.

I found particular solace in the writings of Saint Paul. He knew suffering too. He had a thorn in his flesh that tormented him (2 Cor. 12.7). Many biblical scholars have interpreted this to be a sickness or a physical disability. Like me, Paul prayed for deliverance from his affliction. Our “thorns” remained to torment us. The Lord said to Saint Paul, “My grace is sufficient for you, for my power is made perfect in weakness.” (verse 8).
Earlier in that same letter, Saint Paul mentioned being hard pressed but not crushed, perplexed but not despairing, struck down but not destroyed (4.8-9). It’s meaty stuff for a reader like me. I found great encouragement in his words: “Therefore, we are not discouraged; rather, although our outer self is wasting away, our inner self is being renewed day by day.﻿ For this momentary light affliction is producing for us an eternal weight of glory beyond all comparison,” (4.16-17). That ‘eternal weight of glory’ is achieved when we unite our sufferings with the sufferings of Christ.
It is because of this mysterious union with Christ that people who suffer are indispensable to His Church.
If sufferers are willing to let Christ be their interior guide and Master, new dimensions to the Kingdom of God will open to them. This has certainly been my experience after more than twenty years of serious disease that is slowing destroying my body. Strangely (yet wonderfully) my inner self is being renewed day by day, just like Saint Paul said. I am not alone in this revelation. Millions of ordinary people in each generation have discovered it too!
Christ has granted us -- and I feel awkward even writing this! -- a special grace that transcends our suffering. Suffering carries the capacity to strip aware all things extraneous to life, leaving only that which is essential. What is essential? The light of Christ illuminating human hearts is essential. It warm and melt the terrible icy grip of human sorrow and grief. That’s what is essential to those of us who suffer!
Mark Pickup
(* This blog posting was taken from a larger column I wrote for Canada’s Western Catholic Reporter under the title “Christ’s light melts human suffering: Columnist discovers Jesus’ grace to transcend pain.”
http://www.wcr.ab.ca/columns/markpickup/2006/markpickup103006.shtml )

Posted by Mark Davis Pickup at 9:29 PM No comments: