Taking the love of Christ to India's blind children

A few years ago I was contacted by Dr. Shantijai Khristmukti in the Gujarat region of India. Dr. Khristmukti heads a ministry for blind children and adults called The Bartimai Centre for the Blind. Apparently Dr. Khristmuki came across the HumanLifeMatters (HLM) website and sent an email to explore possibilities of an HLM affiliation in India with their outreach out t

o people with blindness.
Much like North America's people with disabilities, the disabled of India tend to occupy the very bottom of the social classes. The difference is that in India, poverty exists on a completely different scale to North America that makes our poor look fortunate in comparison.

HumanLifeMatters was struggling to establish itself locally in Edmonton (Canada) and was in no position to consider branching out – let alone starting an international HLM affiliate in one of the poorest regions in the world. Perhaps we were simply too timid to step out in faith. (?)

The irony is that HumanLifeMatters existed in one of the wealthiest provinces (Alberta) in the wealthy country of Canada. Despite this, we could not find Christians to catch an ongoing commitment to the HLM vision for outreach to people with disabilities and bring them into our churches. HumanLifeMatters folded in 2007.

I attribute much of HLM’s failure to my own lack of leadership, inadequate vision and spiritual timidity. The Bartimai Centre for the Blind, however, not only continues but seeks to expand into new areas. Dr. Kristmuki would like expand the ministry’s work in the villages of Gujarat state where they will get positive support. He would also like to hire professional trained staff comprised of a nurse, Field worker, Driver and Supervisor. The team will visit at least 20 villages a week.

Dr. Kristmuki explained, “Initially we will work for 20 villages and later extend up to 60 villages. The proposed budget for all these activities and personnel will be $3,500 – pa" [per annum]. It’s a modest amount of financial support with dramatic and lifelong dividends.
Dr. Kristmuki’s gigantic Christian faith, vision and daring serves as an indictment to the likes of a weak-kneed Christian like me.

This Christmas, Dr. Khristmuki sent me and email directing me to their website. I was/am in awe. Go to the following video link to see this Christian ministry to the Blind of India:
http://bartimai.googlepages.com/video.htm , and more specifically view the 12 minute video about the work of Bartimai Centre for the Blind at http://www.godtube.com/view_video.php?viewkey=1d0119be83a57d690b58
Why specifically the blind in India?

Dr. Kristmuki explained in his video that there are 40-million blind people in the world of which 25% are in India. Ten percentage of India’s population have significant visual impairment. Many are children who are either born blind or develop blindness in the early years of their lives. A major portion of India's blind children are found in in villages in the lower strata of society: The cau

ses of their blindness vary from malnutrition to lack of medical care, superstition, poverty and negligence. By providing multivitamins, vitamin A and other preventive measures to pregnant women and children under five years, the percentage of early blindness can be reduced considerably.

Dr. Kristmuki observes that “many of these children have parents who are blind, single, divorced or in other ways cannot provide for their growth, nurture and education. We have seen many children die as parents are unable take care of their blind child.”
Holistic care 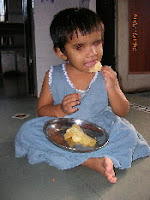 The Bartimai Centre for the Blind offers holistic care for these blind children, providing for their physical, educational, emotional and spiritual needs under the lordship of Jesus Christ. Although it is a Christian ministry, they accept children from other religions. They also provide services to visually impaired and blind adults.

The mission of the Bartimai Centre for the Blind is:

- To collect information on Visually Impaired Persons children and adults in any part of Gujarat.
-To provide living hope to blind children.
- To provide facilities for Socio-Economic development of women and blind children in urban and rural settlements.
- To impart in their Education, Cultural and Economical development, particularly those that are in rural areas.
- To help in prevention and eradication of blindness in early childhood through proper guidance and training.
- To arrange training programs on Gender issues and their upliftment and also visually blind children.
- To train blind people for becoming self-employed persons.
- Our aim is to achieve these objectives so that blind people and children can live happily and independently with self-respect and earn a livelihood.

This Christian ministry clearly cuts close to the heart of Christ. If you are interested in supporting the work of the Bartimai Centre for the Blind, contact Dr. Kristmuki at skblind@icenet.net .