In a recent blog I addressed the idea of Christian perinatal hospice. It is a concept whereby parents facing a pregnancy involving a terminally ill unborn child are supported to carry their baby to term and prepare for their child’s death. It is a ministry of loving care for the entire family while honouring the humanity of their baby.

No sooner had I written the blog and I came across a disturbing article published in the March 23rd 2012 edition of the Journal of Medical Ethics entitled “After-birth abortion: Why should the baby live?” It was written by Dr. Alberto Giugilini at the University of Melbourne in Australia and Francesca Minerva who is associated with Oxford’s Uehiro Centre for Practical Ethics in the United Kingdom.

In the article, Giugilini and Minerva state: “We claim that killing a newborn could be ethically permissible in all the circumstances where abortion would be. Such circumstances include cases where the newborn has the potential to have an (at least) acceptable life, but the well-being of the family is at risk.” They argue that newborn babies are only potential persons without any interests and should be subject to the interests of actual persons of their families. They try to extend the abortion mentality beyond birth: “If criteria such as the costs (social, psychological, economic) for the potential parents are good enough reasons for having an abortion even when the fetus is healthy, if the moral status of the newborn is the same as that of the infant and if neither has any moral value by virtue of being a potential person, then the same reasons which justify abortion should also justify the killing of the potential person when it is at the stage of a newborn.” Giugilini and Minerva do not identify when they think newborn babies should become actual people.

Their argument is not new, nor are they the only ones to advocate such things in the callous Brave New World of secular bioethics. American ethics professor at the University of Virginia and Harvard, Joseph Fletcher (1905-1991) was a pioneer of bioethics. Forty years ago, he advocated “post-birth abortion” for disabled newborns. His criteria for “post-birth abortion” was simple: If a baby does not increase happiness or reduce human suffering then the baby should die.

Princeton University professor Peter Singer has argued that infants have no moral right to life because they are not “persons.” In an interview he was asked when he thought an infant becomes a person? He said “sometime during the first year of life.” He has advocated the killing of healthy babies for more than 30 years. In 1981, Singer wrote:

Now it must be admitted that these arguments apply to the newborn baby as much as to the fetus. A week-old baby is not a rational and self-conscious being, and there are many non-human animals whose rationality, self-consciousness, awareness, capacity to feel pain (sentience), and so on, exceed that of a human baby a week, a month, or even a year old. If the fetus does not have the same claim to life as a person, it appears that the newborn baby is of less value than the life of a pig, a dog, or a chimpanzee [Peter Singer, "Taking life: abortion", in Practical Ethics (London: Cambridge University Press, 1981), p. 118] (emphases added)


One might be inclined to relegate such ideas to quacks but that’s not true. These barbaric views come from professors at prestigious universities. More and more, what they espouse is being accepted in elite society and put into practise.


Why is the term “after-birth abortion” used instead of infanticide? Could it be that abortion is so pervasive and the abortion mentality so widely accepted, that couching infanticide in the abortion mentality is perceived as an easier sell to society? After all, the culture has coarsened to the point where killing disabled newborns is accepted, but not yet so coarse as to sanction the killing of healthy but unwanted babies. The idea will require some – how should I say it? – marketing. 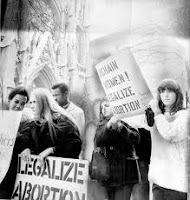 Remember that abortion had to be marketed in the 1960s to soften public attitudes. Previous generations would be horrified at the wide-spread abortion we now have in Canada, the United States and Europe. What was unacceptable in the past, becomes tolerable today and commonplace tomorrow, unless checked by moral absolutes.

Yes! Human Life does matter. Abortion should only be allowed if done early. Medical termination should should be performed early in pregnancy and through doctors who have been granted special authroisation to aminister these medications.