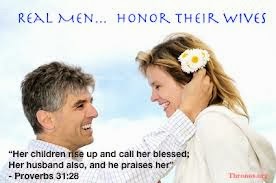 It is by watching the dynamics between their father and mother that children learn about proper (or improper) relationships between the sexes. It is in the home that children are first introduced to the concept of love between a man and a woman united in marriage. It is by observing their parents that children first learn about loyalty, commitment and mutual submission and self-sacrifice for the betterment of the other. That is the way it supposed to be.

Boys learn from their fathers. Dads, be careful of the example you set for your sons. Whether bad or good, your example will be your legacy. Only you can decide which it shall be.

After 40 years of marriage and being a father and grandfather I believe the truth of the old adage: The best complement a man can give to his children is to tell and show them he loves their mother.

Marriage between a man and a women is a holy covenant ordained by God. Men, nurture your marriages, honor your wives.