NATURE IS A METAPHOR

It was a difficult time. Ten days after my wife's mother died, during a brutal Canadian January cold-snap, the weather moderated slightly to allow us to bury her body. A pall hung over the family waiting for the burial.

LaRee stood brokenhearted at the grave site. It was not that her mother's death was unexpected, her health had been gradually failing for years, but the dreaded moment arrived and this was the conclusion.

LaRee can take comfort knowing she lovingly and faithfully journeyed with her mother to the end of her earthly life. I wrote about this a few months ago for Canada's Western Catholic Reporter. The American Life League re-published it two days before the burial of LaRee's mother, with a note acknowledging the death. (See attachment at the top of this blog entry.) 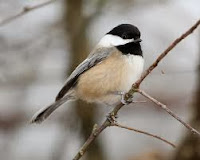 I sat in my wheelchair, a respectful ten feet back from the grave-site, to give LaRee some time to say goodbye before the casket was lowered into the frozen earth. Despite cold Canadian air, the sun shone and slightly warmed the side of our faces like a reminder that winter will eventually give way to Spring -- and to punctuate the point, I heard a chickadee in the trees above the grave.

Nature itself proclaims the glory of the Lord (Psalm 19.1-2). Nature is a teacher. The shadows of the valley disappears in the ascent up the mountain to reveal the magnificent peak. A grain of wheat falls into the ground and comes forth later to bring its harvest. Our Lord spoke of this.

LaRee's mother was a simple woman who loved shiny things and

butterflies. Even the butterfly is a metaphor for our resurrection. The lowly caterpillar goes into a cocoon only to emerge a beautiful butterfly. Yes, nature is a witness to its Creator.

Spiritual things are not mere metaphors for physical reality. The physical world is a metaphor for spiritual reality. -- MDP
(Link below is to John Rutter's Look At the World, Cambridge Singers, on image or https://www.youtube.com/watch?v=Rb0g-npfVcI )