The Canadian Supreme Court is about to delivery its decision on 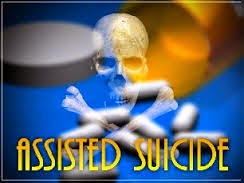 euthanasia and assisted suicide. I published on this blog a letter I wrote to the Chief Justice. A few weeks later I sent a second expanding on my plea not to strike down the nation's laws prohibiting assisted suicide and euthanasia. The text of that second letter is below.

There was no reply. I am informed the esteemed Chief Justice does not condescend to read letters from ordinary people.

I may be one of the ignorant and dusty unwashed masses but I still care deeply about the future of my nation. I can not simply sit back when a major shift may occur to the social, legal, and medical landscape of Canada that sanctions the killing of vulnerable Canadians.

The text of my second letter of last November is below. -- Mark

Euthanasia and assisted suicide lobbyists say Canada’s laws against assisted suicide are discriminatory against the incurably sick and disabled because they are denied the ability to commit suicide that able-bodied Canadians can do. That argument is deeply flawed. Just because someone can commit suicide does not mean they have a right to do it. There is no “right” to suicide in Canada. If there was a right to suicide, why would Canada’s Parliament UNANIMOUSLY support the idea of a National Suicide Prevention Strategy as they did in October 2012?

If the Supreme Court strikes down Canada’s law against assisted suicide or expresses support for assisted suicide for incurably ill and severely disabled Canadians (like me) what sort of message will that send to us? Parliament gives full support to suicide prevention for the healthy and able-bodied while the Supreme Court supports assisting the suicides of the sick and disabled? That is the message I will hear loud and clear. Public policies and laws do not exist in isolation; they must have continuity and consistency.

Right to die proponents bolster their argument for assisted suicide by citing Section 7, Legal Rights, of the Canadian Charter of Rights and Freedoms: “Everyone has the right to life, liberty and security of the person and the right not to be deprived thereof except in accordance with the principles of fundamental justice.” The very section they cite for security of the person undermines their argument about a “right to die”. Section 7 begins by affirming and declaring the right to life: It says nothing about a right to death![1

As I mentioned in my last letter, pain management of the 21 Century is so advanced that people need not suffer and die in pain (see quote by palliative care specialist Dr. John Scott).

Advocates of assisted suicide say people should be able to decide the time and place of their own death. If that is true then the ‘right’ of autonomous self-determination applies equally to suicidal healthy and able-bodied people as to the sick and disabled. There is no place for a National Suicide Prevention strategy or suicide prevention programs because they impose on the “right to choose the time and place of one’s own death.” The suicidal able-bodied and physically healthy person can say their emotional pain is as bad (or worse) than my physical pain and who are we to say it’s not. They could be right.[2] They could ask for help killing themselves in fear they might botch their suicide, putting them in a worse position, and jeopardize their twisted interpretation of “security of the person.

In order for society to recognize one person’s perceived 'security of the person' the greater community’s proper sense of interdependence will suffer. This must not be, Madam Chief Justice. The Common Good must prevail.

[1] Even the United Nation’s Universal Declaration of Human Rights, Article 3, declares firstly the Right to Life before the Right to security of the person. It says nothing about a right to death either – and with good reason. Without the Right to Life guaranteed, all other human rights become arbitrary and uncertain. Death is an eventuality not a right.
[2] I have suffered great physical pain and great emotional pain. It is my experience that emotional pain is worse than physical pain and more difficult to treat.
Posted by Mark Davis Pickup at 10:56 AM