Canadian legal landscape is shifting under my wheelchair. On April 14th 2016, Canada's Liberal government introduced in Parliament for 1st reading it's assisted suicide legislation.[1] Canadian Prime Minister Justin Trudeau initially said he was going to whip his majority government into supporting the bill for state-sanctioned assisted suicide. Unnamed sources informed me he was faced with a potential Caucus revolt over that. We are now hearing rumbling that Bill C-14: Medical Aid in Dying may go to a free-vote in Parliament. We'll have to wait and see. 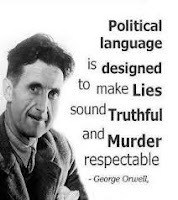 Don't you just marvel at the ingenious euphemisms people will conjure up to cast abhorrent things in a positive light and make distasteful topics more palatable? Skilled conjurers of euphemisms can make murder seems altruistic, even virtuous, to a gullible public. We find one such phrase on the government's new assisted suicide bill under the deceptive title "Medical Aid In Dying". Absolutely Orwellian! Medical aid in dying used to be called palliative care. Doctors, nurses and pharmacists helping suicidal sick or disabled people kill themselves is properly called MEDICAL KILLING and that's what C-14 should have been called, to be accurate. But accuracy would not help the bill pass into law. It must be sugar-coated with a euphemistic title.

A TV reporter came to my house to interview me about my opposition to Canada's shiny new bill for assisted killing suicide. How could I deprive someone suffering in pain of a death with dignity if they request it? Well, first of all, thanks to an advanced array of 21st century analgesics and pain control techniques people do not need to suffer in physical pain. Secondly, the reporter's question was couched in a one dimensional context. Assisted suicide has far reaching implications beyond the individual. It changes the proper and historic role of physicians from healers to killers. The doctor can become the most dangerous person to sick and disabled people in a community. Assisted suicide helps to entrench the notion that some lives are unworthy of life[2]. Acceptance of medical killing coarsens a nation's conscience. 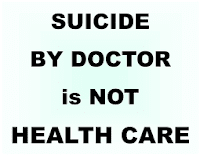 Acceptance of euthanasia and assisted suicide decreases the interest in, and stature of, palliative care. We see this played out in the Netherlands after many years of legal assisted suicide. In their recent book It's Not That Simple: Euthanasia and Assisted Suicide Today, palliative care nurse Jean Echlin and Ian Gentles wrote that the Netherlands "now has a total of only 70 palliative-care beds, in contrast to the many thousands of such beds in Britain, which has not legalized euthanasia."[3] State-sanctioned medical killing, such as Canada is about to embark upon, will fundamentally alter the moral, medical and legal character of Canada.

That is why a suicidal sick, dying or disabled person should not be given help to kill themselves.  He/she is entitled to the very best palliation available and comfort until natural death.  That's what a civilized society does. There's more than one dimension to assisted suicide. Canada's narcissistic pretty boy Prime Minister Justin Trudeau and his government do not seem to understand that. They are about to make Canada a land of dark and dangerous shadows under the guise of autonomy.