The pain of watching a loved-one degenerate

Recently my wife LaRee were in the Canadian province of Manitoba to deliver an address about suffering. I delivered the perspective of someone with a degenerative, incurable disease. She gave the perspective of a loved-one watching the degeneration occur. Below is part of her address. More will follow in the coming days: 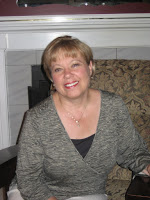 "IT'S EASIER TO BE THAN TO WATCH"

Mark lives with the real symptoms of aggressive, degenerative multiple sclerosis, which have their limits. I am left to witness it all, ― and imagine. Imagination has no limits. That is why I believe it is easier to be than to watch.

The 19th Century writer, Victor Hugo said, “To love or to have loved, that is enough. Ask nothing further. There is no other pearl to be found in the dark folds of life. To love is a consummation.” -- And so it is.

Yet as a wife, mother and now a grandmother, I want more, and I ask further.

I want to protect those I love from pain, emotional hurts, disappointments, and even life, as it ends, — but I cannot. So often I sat at the bedside of suffering loved-ones and prayed, “Lord give me their pain” – as though there is some quota of suffering to be filled which I can bargain over with God. There is not.

Romantic love begins with a glance and a hello and ends in tears of goodbye at life’s conclusion and separation – or it should. Life begins with the agony of childbirth but is quickly forgotten by the power of love. Such is the love for a mother for her children.

When Mark and I married, he was so healthy and active. For the first eleven years of marriage he was a super-achiever not only in his career but with family life. After being diagnosed with MS, his career stalled and he was often too sick to participate in family activities. Our children were 7 and 5 when Mark was diagnosed with MS. They had difficulty understanding why their Dad could not play and be active like he used to be.

At the time that Mark was diagnosed, I didn’t even know what MS was. I had no idea of the impact it would have on our future. And so I began to research the medical literature and even visited a few auxiliary hospitals to see if I could pick out the people with MS. I noticed the canes, the crutches, the wheelchairs and scooters, the van contraptions and curb cuts. Multiple sclerosis meant disability! I looked into the faces of loved-ones of patients with MS and wondered if I could face the heart-break and hurt.

My initial reaction was anger. It was irrational but my immediate response was anger. How could Mark do this to me? How dare he get sick!

He was supposed to be the strong one. I was the weak one. “Damn you!” I thought. If one of us was to get sick, it should be me. I could cope better with disease. Mark was the one with the most energy. I could accept this much more easily if I was the sick one. I could just slink away from the world, it would be okay. I was angry, sad, and bitter but most of all,... I was afraid.

I wanted to correct the fate God allowed by trying to convince Him he made a mistake. Mark could raise the children, remarry, and go on with life.
“I can’t do this!” I cried. “I cannot sit back and watch this Lord.” I pleaded with God to give me the MS.

Mark’s MS started changing him. I began to gauge the distance between benches in shopping malls when we went shopping in case he needed to sit with exhaustion. I started fearing places with crowds. He might get impatient and I would see that look of frustration on his face.

Then one afternoon I looked on in horror as my husband began to crawl up the stairs in our bi-level house so he could go to the bathroom. I realized our life had changed and I had to make some decisions. The first decision I had to make was whether I was prepared to stay in the marriage.

Many times Satan told me that there was an easier way out. “You’re still young. The kids would get over it,” He whispered over my shoulder. “You can start over like many other women after divorce.” The temptation continued: “You can get help from other family members. They will understand.” Even people at my work asked why I was staying with Mark. (?)

It did not take long to realize I needed to get serious with God and ask for his hand if I was going to jump on the wild MS rollercoaster ride. My first prayer was to ask for a wheelchair accessible home so we could begin our new life TOGETHER: God, Mark and me.
Posted by Mark Davis Pickup at 1:11 PM