I do not know what it’s like to lose a child and I hope and pray I never do. All my children, and now grandchildren, are healthy and strong. My family is truly blessed and I try not to forget that fact.

There are expectant parents who face the terrible reality that their baby will be born with a terminal condition. They are usually told after a prenatal test and are given the choice of continuing the pregnancy or aborting their baby.  Parents are often pressured to make their decision quickly, particularly later in pregnancy, given the complications that can arise. The problem is that they are overwhelmed by the devastating news; they are hardly in a position to make such a heavy decision.

According to Bill Saunders of Americans United for Life, only twenty percent of couples will bring their pregnancy to term.[1] Saunders also reveals that parents who chose abortion have deep regrets. Perinatal hospice can provide options that comfort, nurture and support for parents and also honours the humanity of their babies.

This may involve helping prepare for the baby’s arrival and death, answering questions and concerns, or helping to create memories that will last and comfort the family in their loss.  Perhaps it might include ultrasound images during the pregnancy, video recordings, making cast impressions of the baby’s hands and feet or taking snippets of hair for a memory box or scrapbook, and involving siblings and grandparents. Perinatal hospice can empower grieving parents to prepare for their baby’s birth and death. They may have months or only days to prepare. The goal is to support the parents to make the time they have uniquely theirs’.


When the baby arrives perinatal hospice ensures he/she is treated with love and respect by health care professionals the parents have come to know and trust. Perhaps a professional photographer of parents’ choice will be present to capture images and memories to be treasured. A priest may be on hand to give last rites. Perinatal hospice helps ensure Interdisciplinary plans are in place to ensure support for the family. 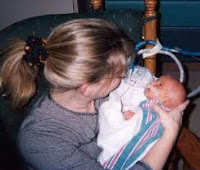 Time between the family and baby is respected. Even when the baby dies nurture for the parents does not stop because the family has had the support to say goodbyes to their baby. Any fears of abandonment are removed even after baby passes by perinatal care that encourages healing.


This is a dramatic contrast to the sudden separation that occurs when the pregnancy is terminated by abortion.   In areas where perinatal hospice programs are available, up to eighty percent of parents facing a fatal anomaly of their unborn child will choose the perinatal option.[3]


Christian perinatal hospice options should be available in communities. Wouldn't it be a wonderful witness of Christ’s love for hurting parents?  The following link is to a beautiful and sensitive video highlighting perinatal hospice. Is it an idea that's appropriate for your community?
http://www.youtube.com/watch?v=tY7mq1g9pGk

[2] Regarding secular hospice, Founder and President of the Hospice Patients Alliance, Ron Panzer, voiced similar concerns about secular perinatal hospice. He observed "Giving birth to the baby and seeing how the baby does while giving all needed treatments and nourishment would be the expected choice for those who value the life of the baby. However, if one gives birth to the baby and then withholds food and fluids, and most likely terminally-sedate the baby, one is imposing death, just the same as is done with some elderly and severely disabled in hospice."

Panzer continued, "I am certain that the ability to use hospice for the newborn will be misused to end the lives of some babies who are not truly "terminal," but have congenital defects or chromosomal abnormalities/differences in the manner of pure eugenics. What is to stop "perinatal hospice" from being used to end the lives of say, Downs syndrome babies? The public (the parents) may "feel better" because they get to hold their baby for a while and love it, while its life is being ended "peacefully" as it sleeps to death. What's to stop terminal sedation from being applied here again? I have grave reservations about this because I know the hospice industry and how they think. " This is why perinatal hospice in the hands of secular bioethicists would prove disastrous. What's to stop the sorts of practices outlined by Mr. Panzer is to have an orthodox Christian foundation that is loyal to historic Church teaching and morality.