Above is a link to the website for the NATIONAL DAY OF REMEMBRANCE FOR ABORTED CHILDREN, on September 14th 2013. Gravestones are located in 39 states across the United States for the lives of more than 55 million children aborted in America since 1973 . 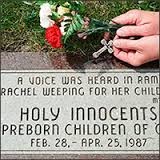 Abortion is a national holocaust of unprecedented proportions  It is most appropriate that people of good will recognize this day of mourning. Not only will it bear witness to this crime against humanity that continues even as I write this note, it may help to change people's hearts.

Abortion is the primary human rights issue of our time. Slowly the public mindset is turning against abortion on demand that has been the way of the land in America for more than 40 years. More and more people are becoming pro-Life. Those who are committed to the great cause of ending abortion may not see success in our lifetimes, but I believe that abortion will one day be unthinkable.

Do not think the battle we are in is unique. Remember the epic struggle abolitionists had to stop slavery. Be encouraged by the words of Abraham Lincoln: 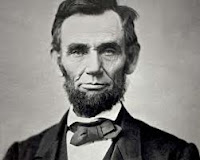 "We will gain more converts each day. We will grow strong by the violence and the injustice of our adversaries and unless truth be a mockery and justice a hollow lie, we will be in the majority."

I am a child who should have been aborted. I am not at all spiritual or illogical. I respect and understand your opinion of the abortion debate.

If I were to believe there were a higher power. I would like to believe if I had been aborted I would have been born into a family of privilege. Not just financially but robust in opportunity. Where, because we did not have to struggle we could live. Live to serve others. Some say its wishful thinking.

Instead our prison system is filled with people who should have been aborted. Instead lived a life of "pain". Internal and externally. Directly or indirectly impacting their family and community. Mostly, in a negative capacity.Impacting generation after generation. Its easy for you and others to make light of the situation. Or to dismiss it by saying that I could have been born in Syria or some other waring nation.

I rarely, if EVER see PRO-LIFERs, taking in adopted or fostering children. I couldn't even get anyone to sponsor me when I was in the system. Why? Because I hadn't been sold for drugs or gang raped by my father's friends. I was abandoned. I am the second of twelve kids. She had me at 16. Drug addicted in and out of prison. Why was she allowed to populate? Father in prison for life for murder. Growing up no money, therapy, or good intentioned support will ever comfort me. Lost, I rome this world a nothing. I believe when your mother doesn't care about you the world doesn't either. I have observed this law and experienced it. Its not because of grace I'm not in prison yet.

We don't matter to you or any pro-lifer. Its in their prideful intentions they want PRO-choicers to believe they truly care. Family planning is the greatest gift to man. If we all could be wanted, what kind of world would that be?

Thanks for your comment. A few points. What makes you think prisons are filled with people whose mothers who wanted to abort them? Secondly, you are very wrong about pro-Lifers not adopting or fostering. I co-founded a crisis pregnancy centre that also worked in the area of adoption. Pro-Life people flocked to the service to adopt. It's the same in other jurisdictions.