When I was young, it was fashionable to grow a beard and long hair, put on a tie-dyed t-shirt, faded jeans and head off to to “find oneself.” Often I wondered what would happen if those searchers didn’t like the inner-self they found? At a personal level, I had already met my inner self, in the comfort of my own home, and was horrified at what I found! What I found was a cesspool of self-interest and self-exaltation. Pride was the underlying motive for all I did, with occasional streaks of kindness which I twisted to bolster delusions that somehow beneath all the corruption I was actually a good man.

Looking for the god or goddess within

Modern spirituality urges us to look within ourselves and embrace the inner man and the god within. I did an Internet search for “find god within” which identified over 124-million results! It seems that finding the god within oneself is quite a hot topic. There is a shaky assumption that inner peace awaits as we discover the god or goddess within.  On one particular Internet site a fellow who identified himself as a Grand Master (of what I don't know) told his followers (how many I'm not sure): “Yes, there is a God, but not the God you perceive. As Jesus said, “Don’t look here or there for heaven. It is within you.”” Methinks the "Grand Master" was taking a few liberties with Luke 17.21. 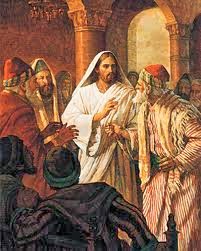 In that passage, the Pharisees asked Jesus when the would come.  Jesus replied that the “ (not heaven) is amongst you.”  Our Lord was referring to the being internal and spiritual rather than external and physical. Taken in light of other things He said about the Kingdom of God (Mark 1.14-15, Luke 16.15-17), his last comment likely means that the kingdom has arrived in the person and ministry of Christ.

warned about pride and self-exaltation in City of :

"For, pride is the beginning of all sin. And what is pride but an appetite for inordinate exaltation. Now, exaltation is inordinate when the soul cuts itself off from the very Source  to which it should keep close and somehow makes itself and becomes an end to itself, … the soul falls away from the unchangeable Good which ought to please the soul far more than the soul can please itself.”

The “Source” and “Good” referred to is the God of the universe not some puny, make-belief god within us. was referring to the great I AM WHO I AM of Exodus, the Alpha and Omega of Revelation 1.8. (Also see Jesus’ words in see John 8.57).  The simple fact is that God is who He is quite apart from what Mark,Tom, Dick, Grand Master Harry thinks.

The eyeless “I” of self exaltation 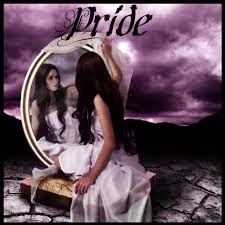 Pride poisons our potential to foster or even care about our relationships with other people, other than how they can puff us up.  We become an eyeless “I”. Self-exaltation kills the potential for a relationship with the great I AM WHO I AM, through Jesus Christ. That has eternal implications.  I want to help you not to overlook this point. We live in a time and culture that celebrates Self above everything.

Fellow Christian, place a guard around your heart against self-exaltation lest you fall away from the warmth and light of Christ.  He said, “Whoever exalts himself will be humbled but whoever humbles himself will be exalted.” (Matthew 23.12.) And Jesus practiced what He preached.

Saint Paul wrote, “Have among yourselves the same attitude that is also yours in Christ Jesus, who though he was in the form of God, did not regard equality with God something to be grasped. Rather, he emptied himself, taking the form of a slave, coming in human likeness; and found him in appearance, he humbled himself, becoming obedient to death, even death on a cross. (Philippians 2.5-8)

Live and walk humbly before God (Micah 6.8). If there’s any exalting to be done toward you, let it come from Him.  In such a state, you will find your worth as a child of God.

“But to those who did accept him he gave power to become children of God, to those who believe in his name.” John 1.12

So our goal as humble followers of Christ is not to be great in the eyes of the world. I agree completely. But I wonder how this relates to your quote at the top of the post about wanting to become a great western (christian?) civilization again.

Profound in its simplicity that a at the end of the day, as St. John suggested, we are called to be less so that Christ can be more in our lives and everyone's life.