LOVE CAN TRANSCEND TRAGEDY AND GRIEF

A number of years ago, my wife LaRee gave a rare speech about her journey as a loved-one of someone with a degenerative and incurable disease. It was rare because she's terrified of public speaking. LaRee is an extremely private person, and  yet gave a keynote address to a sold-out audience of 800 people at the U.S. National Right to Life Prayer Breakfast. She spoke honestly from her heart. At times her voice quivered from fear and emotion but it was her humble offering to God and those present at the Prayer Breakfast. She news people with suffering loved-ones must be in the auditorium. I often spoke throughout America and Canada about degenerative disease and disability. My audiences got one side of the story. What about families who must helplessly watch someone they love struggle with disability or decline with incurable degenerative disease? She spoke to a national audience once, and only once.

You could have heard a pin drop during her address. When she finished, the audience responded with a prolonged standing ovation. Many in the audience had disabled children, ailing spouses or parents. LaRee was swamped by people from all across the U.S.. She listened, consoled and prayed with people as they shared their pain with her. LaRee's tender and broken heart communicated easily with their broken hearts.

Here is part of what LaRee said:

There is a special torment experienced by those who watch a loved-one suffer. To see disease rack their bodies, and souls, increases the sum total of suffering ... because I suffer too. I believe it is harder to watch degenerative disability torture and break my loved-one, than to actually suffer the disease. I watched my grandparents suffer infirmities associated with extreme age, such as blindness, Parkinson’s disease and cancer. I walked my mother through heart disease and dementia until her death in late 2013, at the age of 81 years.
Mark lives with the real symptoms of aggressive, degenerative
multiple sclerosis, which have limits. I am left to witness it all, ― and imagine. Imagination has no limits. I believe it is easier to be than to watch. Despite countless trials, love has prevailed. But love is like the two sides of a precious coin.

The two sides of love are this: It is life’s greatest ecstasy but also the cause of life’s greatest agonies and anguish. The 19th Century writer, Victor Hugo said, “To love or to have loved, that is enough. Ask nothing further. There is no other pearl to be found in the dark folds of life. To love is a consummation.”    -- And so it is. 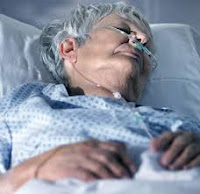 Yet as a wife, mother and grandmother, I want more, and I ask further. I want to protect those I love from pain, emotional hurts, disappoint-ments, and even life as it ends—but I cannot.

So often I sat at the bedside of suffering loved-ones and prayed, “God, give me their pain” – as though there is some quota of suffering to be filled which I can bargain over with God. There is not.

When Mark and I married, he was so healthy and active. For the first eleven years of marriage he was a super-achiever not only in his career but with family life.

After being diagnosed with MS his career stalled and he was often too sick to participate in family activities he previously led. Our children were 7 and 5 when Mark was diagnosed with MS. They had difficulty understanding why their Dad could not play and be active like he used to.

At the time that Mark was diagnosed with MS, I didn’t even know what the disease was. I had no idea of the impact it would have on our future. And so I began to research the medical literature and even visited a few auxiliary hospitals to see if I could pick out the people with MS. I noticed the canes, the crutches, the wheelchairs and scooters, the van contraptions and curb-cuts. Multiple sclerosis meant disability! I looked into the faces of loved-ones of patients with MS and wondered if I could face the heart-break and hurt.

My initial reaction was anger. It was irrational but my immediate

response was anger. How could Mark do this to me? How dare he get sick! He was supposed to be the strong one. I was the weak one. “Damn you!” I thought. If one of us was to get sick, it should be me. I could cope better with a disease if I was the sick one.

I wanted to correct the fate God allowed by trying to convince Him he made a mistake. I was sad, and bitter but most of all ... I was afraid and angry with Mark and God.

Mark’s MS started changing him. I began to gauge the distance between benches in shopping malls in case he needed to sit with exhaustion. I started fearing places with crowds. He might get impatient and I would see a look of frustration on his face.

Then one afternoon I looked on in horror as my husband began crawling up the stairs in our bi-level house so he could use the toilet. I realized our life had changed and I had to make some decisions.  The first decision I had to make was whether I was prepared to stay in our marriage.

Don’t think I was not tempted. I was. Self-interest and my own internal poverty told me that divorce was easier. I could start over like many other women after divorce. I knew I could get help from other family members. They would understand. Even people at my work asked why I was staying with Mark because it was easier to walk away than to stay.

But abandonment is not love. It is a betrayal of love, solemn vows, and that which makes people fully human and civilized.

I decided to stay in my marriage and trust that God would see us through to a sacred place of grace and understanding. After 37 years of marriage (26 living with Mark’s MS) I think I have discovered something about love.

Human interdependence, based upon love (both human and divine), is capable of helping us transcend beyond difficult or tragic circumstances and opens new understanding of what it means to be human and part of the human family. I am now convinced a truly civilized society has no place for euthanasia or assisted suicide. It is more inviting that that. People with disabilities or incurable illnesses are, in reality, indispensable to our communities – their lives are full of potential and meaning. Value them, include, protect them, but most of love for the sake of love. Thank you.