"On the heels of a debunked myth that preemies aren't developed enough to feel pain, Calgary scientists are now studying the long-term impact of infant distress and how it may be linked to pain problems and mental health issues later in life."

As late as the 1980s, surgery -- even major surgery -- was conducted on days-old babies WITHOUT anaesthetic because medical experts believed that preemies -- and even some newborn babies -- could not feel pain. Well, it appears that not only do these infants feel pain, it may have life-long effects. (another horrible oops!)

Not only do preemies feel pain, babies in utero feel pain. Dr. Kanwaljeet Singh Anand is Professor of Pediatrics (Pediatric Critical Care) and anesthesiology and pain medicine at Stanford University Medical Care Center. He has stated:

"The position, asserted by some medical experts, that the unborn child is incapable of experiencing pain until a point later in pregnancy than 20 weeks after fertilization predominately rests on the assumption that the ability to experience pain depends on the cerebral cortex and requires nerve connections between the thalamus and the cortex. However, recent medical research and analysis, especially since 2007, provides strong evidence for the conclusion that a functioning cortex is not necessary to experience pain."[1] 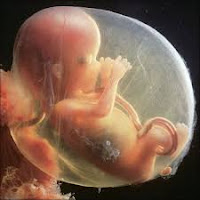 Granted, you will find medical authorities who deny fetal pain. They are often abortion proponents, physicians who perform abortions, or professional organizations representing (or favouring) pro-abortion ideology, such as Physicians for Reproductive Health, the American and Canadian Medical Associations.[2]

[The same website as quoted above with Dr. Anand, answers the pain deniers. See
http://www.doctorsonfetalpain.com/answering-the-pain-deniers/]

I think that if there are conflicting views, then it is incumbent on civilized people to take the path with the least risk of pain to the unborn child about to die. But that's the problem: When it comes to abortion, our culture is not really civilized at all. Babies in utero are killed by the thousands, day after day, year after year, for no other reason than they are unwanted or inconvenient to their parents. Cultural elites, supported by media, and many secular professional medical organizations support the "right to choose" (the death of one's unborn offspring). It is presented under the euphemism of "reproductive choice". It plays up the autonomy of one party by the death of another. Genuine human rights never suppress one human being's right to life for another person's right to pursue happiness.

Abortion proponents and their allies say that admitting any possibility of fetal pain to abortion minded women would hurt their feelings and cause them stress. They would rather inflict excruciating physical torture on an unborn child about to be torn apart (under the fiction that it's only a blob of tissue) than possibly cause its mother emotional discomfort in her abortion decision.

Abortion sympathizers and proponents deny the humanity of the youngest and weakest segment of the Human Family and give another segment of the Human Family preposterous power to decide life and death. Abortion sympathizers and proponents deny any compassion to the most powerless and give all their sympathy and powerful who can decide to kill their own children before birth.

This is not right. It is barbaric! There is no sense of proportion or balance. In order to maintain a false right to abortion for any reason (or no reason), our culture has compromised the integrity its own humanity, damaged women's, and destroyed unborn children's. We are poorer on all fronts.

A proper sense of proportion toward an abortion-minded woman is to show compassion to both her and her baby. It involves giving her ALL the information about prenatal life throughout all 9 months of pregnancy (including ultrasound images of her developing unborn child). She needs to know the risks of abortion -- and there are risks.[3] Abortion is not safer than childbirth in North America, that's politically charged rhetoric without scientific basis.

It is condescending and paternalistic to withhold information from women because it might make their abortion decisions more difficult. They need to make informed decisions and they need the facts: All of facts.

A proper sense of proportion ensures women in crisis pregnancies have positive alternatives to abortion.  That's what Crisis Pregnancy Centers across North America do every day. Many are funded by individuals or churches and operate with shoe-string budgets and volunteers. They also deserve federal, state and provincial support. After all, America's largest abortion organization, Planned Parenthood of America and their affiliates, have been receiving half a billion dollars annually for years from federal and state governments.

If the "choice" to kill one's unwanted offspring before birth is the issue, then provide equal government funding to life-affirming pro-life organizations (such as pro-life community-based Crisis Pregnancy Centers). Even the ground for decision making, or defund Planned Parenthood.

A civilized society does not stack the deck against women to make life-affirming decisions. Level the ground upon which life and death decisions are made. And if abortions are to continue (God forbid!) then at least provide anaesthetic to unborn babies before their deaths by abortion. If these children must die to satisfy their parents, at least eliminate any possibility of fetal pain.

Mark Davis Pickup
____________
[1] http://www.doctorsonfetalpain.com/fetal-pain-the-evidence/6-documentation/
[2] Canadian Medical Association on abortion (http://policybase.cma.ca/dbtw-wpd/PolicyPDF/PD88-06.pdf). American Medical Association contradicts themselves on Abortion. They have tried, at one point or another, to play the neutrality card, yet as the pro-life blog Live Action illustrates, the AMA is pro-abortion. (http://www.liveaction.org/blog/ama-radically-pro-abortion/)
[3] I have on file a list of 365 America women, most named with their ages at death, who have died by "safe" legal abortions in the U.S..
Posted by Mark Davis Pickup at 10:24 AM

The gorgeous post learned a great deal Thanks greatly! resource