A SPEECH IN WASHINGTON, DC

Recently I stumbled across a video on Youtube of a 2016 speech I gave at St. Matthew the Apostle Cathedral in Washington, DC. (It's at bottom of this post.) My address was leading up to the U.S. National March for Life in the nation's Capital city. 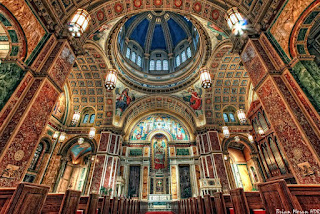 I entered the Cathedral. The art took my breath away. Stunning!
Established in 1844, St. Matthew Cathedral is an American historic site and repository of art and sculpture at its best.

As I prepared to speak, I noticed about three feet in front of me was a marble plaque on the floor with these words: 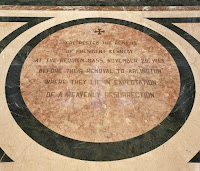 HERE RESTED THE REMAINS OF PRESIDENT KENNEDY AT THE REQUIEM MASS, NOVEMBER 29, 1963 BEFORE THEIR REMOVAL TO ARLINGTON WHERE THEY LIE IN EXPECTATION OF THE HEAVENLY RESURRECTION.

And so I began my speech to pro-life Americans -- some of the finest citizens any nation can have -- who came to Washington from across the Union.  A blizzard was descending on the city but it did not deter hundreds of thousands of people marching in the streets to speak up for the sanctity of human. They called upon legislators to overturn Roe v. Wade that has been responsible for the abortions of 58 million preborn babies. They spoke out against acceptance of euthanasia and assisted suicide.

Below is the Youtube video of my speech. Please excuse a few audio problems that briefly pop up in a few places.  If you would like me to speak in your area about against euthanasia, assisted suicide or address disability or a Christian perspective of suffering, contact me by email at HumanLifeMatters@shaw.ca -- Mark