A MESSAGE OF HOPE FOR A TIME OF DESPAIR AND GRIEF

"Canadian doctors committed thousands of homicides in 2018. According to an interim report published by the government, in the first ten months of last year, doctors lethally injected 2,613 patients (with one assisted suicide) — and that doesn’t include the homicides committed by doctors in Quebec, Northwest Territories, Yukon, and Nunavut.

This means well over 3,000 people are killed by their doctors each year in Canada, which — if my math is correct — is more than 250 a month, more than 58 a week, and more than eight per day. Heck, that’s about one every three hours."

What has happened to the beloved nation of my birth? We meet suicidal terminal and disabled people with lethal injections rather than palliative care and treat murder as though it is palliative care! Canada does not have assisted suicide, it has euthanasia! Before the brave and brutal 21st Century, killing was never caring.


Most Canadians requesting and receiving lethal injections are within my age group. I am familiar with overwhelming sorrow and grief that can drive a person to want to die? I also know there is a hope that lies beyond the sorrow. Morning always follows the darkest night.

And so I want to revisit a column I originally wrote twelve years ago for a now-defunct Canadian Catholic newspaper. I've updated it.

Reflecting on the despair that can accompany loss, sorrow, and grief

Acquired and incurable disability is a lonesome journey. At the deepest point of
grieving, life can seem like an endless series of disappointments, accommodations and compromises, lost opportunities and closed doors, inaccessibility, and inexpressible sorrow. One can feel totally alone 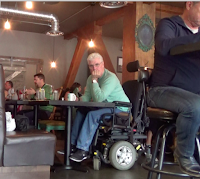 even in a crowded room. It's not that friends are unkind, just hard to find. I know, I've had serious multiple sclerosis (MS) for over thirty-five years. I have been one of that "great family of the heavy-hearted" who must live with sorrow and grief of degenerative neurological or other disabilities.

Each night we dread making our way to the terror of our bedrooms. Darkness awaits to engulf a grieving person in fitful sleep-wake torment. A chorus of self-doubt, despair and fear whisper, "You are alone. You are a burden to people. They wish you were not here." It is then in what seems like an endless night, lying with wide-eyed fear, staring into the darkness, that a bed becomes a rack. The horrible truth of misfortune seems too great to be borne. Throbbing hearts lie open and like a gaping wound. Whimpers break into to sobs of raw, pulsating sorrow.

Grievers awake! Emotions are unreliable. They are apt to intensify the feelings of isolation out of all proportion! Tears can obscure vision and distort perceptions of reality. There is no such thing as an endless night. It only seems that way. The longest night must eventually give way to dawn. It is only fear and grief that tell us otherwise. Even the pitch black of Arctic winter days will, in due course, transform into a peculiar summer of midnight sun.


Perhaps the most famous example is Ludwig Van Beethoven (1770-1827). Most of his vast contribution to the world of music was written in partial or total deafness. George Frederic
Handel (1685-1759) suffered from manic depression. His beloved Messiah was written at the end of a depressive episode. John Milton (1608-1674) was blind when he wrote Paradise Lost (1667). Paradise Lost is generally considered one of the greatest epics in the English language. (Remember that John Milton also wrote Paradise Regained.) Elizabeth Browning was an "invalid and recluse" to use the phrase of one biographer.  There was nothing invalid about her! Her gift for lyric poetry is with us to this day and still enjoyed by millions of people. Franklin Delano Roosevelt was physically crippled by polio at the age of thirty-nine; Despite this, America's 32nd President led an entire nation through the Great Depression and the 2nd World War!

Grief, sorrow and fear are not unique to people with severe disabilities: They are common to the human experience. Everybody is acquainted with sorrow (or they will be). Everyone is afraid. The boastful "No Fear" t-shirt is not true. With the exception of babies and small children, everyone has fears from the past and fears about the future.

Most people are afraid of serious in-depth self-examination because they might come face-to-face with inner-demons, character flaws, and emotional handicaps. They might be challenged to go through a difficult process of change. Some people fear being forgotten while others fear being remembered.

GREAT FAMILY OF THE HEAVY-HEARTED

Helen Keller (1880-1968) went deaf and blind before she was two years of age. In a time when society restricted the lives of people disabilities—not to mention women—Helen Keller overcame monumental obstacles to rise to international stature advocating for world peace, women's suffrage, human dignity and civil rights for other people with disabilities. She once said:

"When it seems that our sorrow is too great to be borne, let us think of the great family of the heavy-hearted into which our grief has given us entrance. Inevitably, we feel about us their arms, their sympathy, and their understanding."

That's my point! All humanity longs for affinity and the understanding of others. All humanity longs for belonging. A young person grieving their paralysis from a recent spinal cord injury may not yet know it but their grief has given them entrance into that "great family of the heavy-hearted" that spans centuries. Those of us who are full-fledged members of that "great family" have the Passion of Christ as our chief example and inspiration.

It is to Christ we can ultimately turn with the knowledge that his sufferings dwarfed all human pains and sorrows. There is no grief Jesus does not understand! Christ is the ultimate affirmation. He is the ultimate over-comer. He can change us, if we allow it, to become victors rather than victims.