HOW DID AMERICA GET IN THIS STATE WHERE SOCIALISM AND BIG GOVERNMENT IS PREFERRED TO DEMOCRACY AND CAPITALISM?

This post was written before the U.S. election. I have changed it to reflect what I believe America faces under the Biden/Harris administration.

“He was in the hospital from the middle of Lent til after Easter. When he was better, he remembered the dreams he had had while he was feverish and delirious. He dreamt the whole world was condemned to a terrible strange new plague that had come to Europe from the depths of Asia. All were to be destroyed except a very few chosen. So new microbes were attacking the bodies of men, but these microbes were endowed with intelligence and will. Men attacked by them became mad and furious. … Whole villages, whole towns went mad with the infection. All were excited and did not understand one another. Each thought he alone had the truth and was wretched looking at others, beat himself on the breast, wept and wrung his hands. They did not know how to judge and did not agree what to consider evil and what good; they did not know whom to blame, whom to justify. Men killed each other with a sort of senseless pite.”—Fydor Dostoevky, CRIME AND PUNISHMENT.[1] 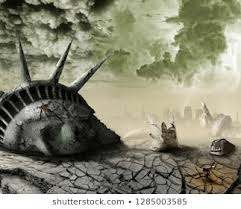 A storm has been gathering on the horizon of America for quite some time. I’ve watched it slowly approaching. Dark clouds of rage and destruction have finally arrived. The threat it poses is more real and dangerous than any external enemy with bayonets storming the shores or intercontinental missiles pointed at America. The threat to American society is from within. This pernicious and malicious home-grown enemy is attacking the foundations of the nation from within, like a cancer. Young malcontents of anarchy— goaded by well-planned Marxists— vow to bring down the United States of America and replace freedom with a tyranny of the left. They are traitors! They are guilty of nothing less that treason, and they should receive a traitor’s punishment.

Do not downplay or ignore the internal danger facing the United States of America.

James Madison (1751-1836) was America’s fourth President and is often called the Father of the Constitution. He said, “If our nation is ever taken over, it will be taken over from within.” His prophetic words speak across two hundred years to twenty-first century Americans. They are watching their cities burn, violence and bloodshed in streets, law and order collapse. Ugly images of streets littered with the shells of burnt out cars, smashed windows of looted gutted stores and businesses are becoming common, America’s flag burning and trampled underfoot.

This should prompt every American patriot into action to take back their country. Marxists and their dullard thugs-of-anarchy make their hundreds seem like thousands. They are wielding power far beyond their numbers, thanks to support and sympathies of Democratic politicians at federal, state and municipal levels. Patriotic citizens are frightened, and they should be. People of goodness feel impotent to stop the carnage, the threats to their safety, property and nation.

Simply put, civilized society is disintegrating before your very eyes! But you must not let this happen! You must act from now until November 3rd to keep the Democrats under Joe Biden and Kamala Harris from taking the Presidency, the House of Representatives and the Senate. It does not matter whether you have always voted for the Democrats, these Democrats are not the Democrats of John Kennedy. They are an aberration. You must not support them.

It so frustrating to helplessly watch what occurring to my neighbours to the south. I am a foreigner, a nobody, witnessing the unravelling of a nation that I’m not a part of but have come to know and love. Since childhood, I’ve looked admiringly from the distant western Canadian hinterland to a glimmer of the great “shining city on a hill” lighting up sky for all to see.[2]  It is the light of freedom, optimism, and trust in God (as your coins so beautifully proclaim). The City has shimmered with patriotic loyalty, family values and interdependent communities. One nation under God made up of independent individuals within an interdependent whole: A people who historically looked to God for guidance. And for 244 years, God blessed America.

Founded on a Judeo-Christian moral ethos, it has been a sacred nation set between two oceans, a beacon to the world for human potential and freedom. But now that shining light appears to be dimming, its flame no longer dancing—it is flickering unsteadily in winds of discontent. What happened? Will the light of liberty be extinguished in the months and years after November? I think I know what happened.

After the Second World War people began to slowly turn away from God. They began to put their trust in themselves and things, treasures of earth rather than that which is treasured in heaven. It didn’t happen suddenly. It happened in small increments. Little bit by little bit, one small shift after another, the great nation under God began to lose its way. Gradually the dividends of a Judeo-Christian moral and spiritual consensus faded. Where were Christians? They made a fatal mistake of seeing things in bits and pieces rather than part of a whole. Yes, Christians were concerned about the breakdown of the family, rising rates of divorce, pushing God out of schools, increasing moral permissiveness and pornography, abortion and more recently, legalized euthanasia. Each shift took people further away from a Judeo-Christian moral mindset that viewed humanity as intrinsically valuable because every human being was endowed with the indelible image of God. As such, they possessed a natural dignity and sacredness. Things or actions or behavior that did not square with those virtues were discouraged or prohibited. Not everyone was Christian but at least they vaguely ascribed to that national ethos because it was embraced goodness and reflected an objective truth about human dignity and sanctity. A belief in the sanctity of essential things like human life and marriage and family were generally accepted by all but a few kooks and provocateur philosophers trying to gain notoriety.  That is no longer the case. We have three generations inculcated with the false idea there is no such thing as absolute truth, only personal relative truth, thanks, in large part, the twentieth century educational reformer to John Dewey.[3]

“John Dewey did more to shape educational methodology than anyone else in the twentieth century.Dewey is the source of much of today’s moral education, where all values are treated as equally valid and students clarify what they value most. … Any value that students choose is deemed acceptable, whether or not it comports with accepted moral standards, as long as they have gone through the prescribed series of steps. Why? Because, as one textbook puts it, “None of us can be certain that our values are right for other people.” Each individual has become an autonomous decision maker, determining his values strictly on his own.”

What we have/are witnessing in the streets with BLM, antifa anarchists (blessed by the Democratic Party) is relativistic morality gone amuck! Today’s young hooligans tearing up America is the reductio ad absurdum of having trampling Judeo-Christian morality underfoot three generations ago. There is no transcendent universal truth. The only absolute truth is that there is no absolute truth. Might makes right. What’s right is whatever is deemed to be right by the most powerful and whatever is fashionably in season at any given time. Right now, the mantra is America bad, communism good. Everybody is being encouraged to “reimagine” America with no police. Imagine the world with no American way, established ideals, capitalism, no private property. In short, “reimagine America as a Marxist state”—the first step of which was the election of the left’s useful idiot Joe Biden.

We must not overlook that seventy-five years ago, almost everyone knew the what the Ten Commandments were. They may not have been Christian, but they knew what they were. Granted, people did not always behave accordingly but they knew in their hearts-of-hearts it was the basis for proper moral behaviour. Most people desired and tried—however uncertain and haltingly—to live by that ancient moral code. They understood there is something called truth and that it simply existed. Their hearts and their consciences verified it.[4]

The Judeo-Christian moral ethos was brought from Northern European Christian culture. The Common Law of western civilization (so despised by the radical left) raised human rights, education, law, culture and mores to heights previously unknown in human history. Anglo-American Common law has Christianity at its foundations. In 1829, in his inaugural address as Dane professor of law of Harvard University, Joseph Story[5] said, “There has never been a period in which Common Law did not recognize Christianity as laying at its foundation.”[6] Until the post-world war generations leading up to today, Western Civilization was viewed as worth defending to the point of death. And it was defended. Hundreds of thousands of mostly men did just that.[7]

On the Eve of the Battle of Britain, Winston Churchill rose in Parliament and stated,

“I expect that the Battle of Britain is about to begin. Upon this battle depends the survival of Christian civilization. Upon it depends our own British life, and the continuity of our institutions and our Empire. The whole fury of the enemy must very soon be turned on us.” He went on urge the British people that they must defeat Hitler. If they succeeded, all Europe would be free. Then the great man warned: “But if we fail, the whole world, including the United States, including all that we have known and cared for, will sink into the abyss of a New Dark Age, … .”[8]

I believe there are similarities between that fateful time and what America faces now. Under the Democrats, America’s great institutions and Empire will be weakened or dismantled. Creeping socialism will overshadow democracy. A terrible disfigurement has begun under Biden/Harris  The greatest nation on earth will be twisted into a socialist state based upon Marxism. Strangely, just as Founding Father James Madison stated, America will be taken over from within. It's being done by leftists, Marxists, and anarchists who have formed an unholy alliance with the Democratic Party.

It’s coming into focus: The undoing of the United States of America will not be by some external enemy storming America’s shores with guns and bayonets, or missiles pointed at the heart of the nation. This enemy is within by treacherous citizens!

[3] … Dewey is the source of much of today’s moral education, where all values are treated as equally valid and students clarify what they value most. … Any value that students choose is deemed acceptable, whether or not it comports with accepted moral standards, as long as they have gone through the prescribed series of steps. Why? Because, as one textbook puts it, “None of us can be certain that our values are right for other people.” Each individual has become an autonomous decision maker, determining his values strictly on his own.”