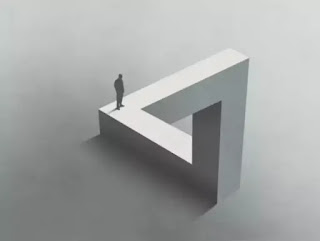 Abortion advocates & progressives talk about reproductive rights. But surely the 1st reproductive right is the right to be born. They say "follow the science" when talking about COVID vaccines but they won't follow the science when it comes to when life begins. Science established decades ago that life begins at conception. To deny this is either a lie, ignorance, or sophistry. They delude themselves. Delusion!

They say the unborn child is not a person yet. Prejudice. The same argument was used against blacks. North American Indigenous people were called savages in order to take their land. In Germany during the Nazi regime, Jews were denied their personhood and exterminated by the millions.

We live in an age of shadows and illusions. We are presented with the illusion that there are more than two genders. If we do not accept this illusion as reality, we are considered bigots. Men dress as women, women dress as men. I am supposed to accept the illusion. No. It is a lie. Everyone knows in their heart of hearts there are two genders, two sexes: Male and female. I do not accept the illusion, no matter how cleverly and skilled it is presented to me. I refuse to play the game. I can not replace truth for a lie or the reality of the natural world for an illusion of progressive ideology.
Posted by Mark Davis Pickup at 6:36 PM