OUR HOUSE IS A VERY, VERY, FINE HOUSE 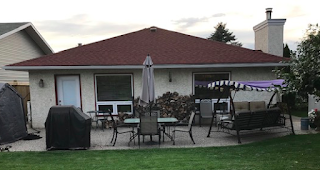 Musician David Crosby has died. Crosby, Stills, Nash and Young were a favourite band of mine back in the 1970s. Their harmonies were so tight for the day. Crosby’s personal life was in shambles, but he gave the world some great music. My personal favourite was Our House.

LaRee had to watch me start to decline. It broke her heart, but she is a realist. We sold our house and built a wheelchair-accessible home. It was our house where we would live a life we knew was going to be hard, but there would be good times too.

You place the flowers In the vase

that you bought today."

Wide-eyed terror of neurological dysfunction took us on a wild rollercoaster ride. The MS attacked my ability to speak, then it would relent. My hearing was affected. My vision was affected. My legs would go spastic and my coordination was impaired. I’d lose the ability to walk or the use of my right arm. All these things would come without warning and no guarantee of remissions. Each remission would return most but not all previous functions—particularly in my legs and arm. A crippling fatigue would overtake me and all I could do was watch life happen just beyond my reach. But LaRee still loved me.

"Staring at the fire for hours for hours and hours,

At times it seemed as though the two of us and our love was all we had.

And rest your head for just five minutes,

Protracted periods of time were spent convalescing. Months turned into years. Years became decades. Then I developed cancer. Our house became a nest, its rooms filled with sunshine coming through windows. We knew Christ was with us illuminating our way. We transcended our lot in life.

For more than 35 years we have lived in our house. It is built on love. Its walls have seen tears and laughter, sad times, and good times. Terror and God’s comfort—often at the same time. Our children grew up in our house, and our grandchildren come to visit from time to time. Consolation turned to contentment.

With two cats in the yard,

Life used to be so hard,

Now everything is easy cause of you."

And then in 2018, something wonderful happened. After so many years paralyzed and in an electric wheelchair with end-stage multiple sclerosis, God raised me out of it to walk again and He returned the use of my right arm. We had expected my next house would be a nursing home. 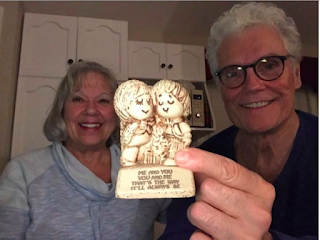 Yes, life used to be hard. But it has also been good. Now everything is easier because of You, my Lord and my God. LaRee and I live in our house, a very, very fine house that You gave to us. We are content to know that Christ is in control. His love and our love fill the rooms.