August 21st 2007 was an uneventful day for most people, but not me. My fifth grandchild was born. To most people, baby Erin Marie is just another wrinkled, nondescript newborn--but not to me. She’s my granddaughter! Baby Erin (and millions of other newborns) represent hope for the future. 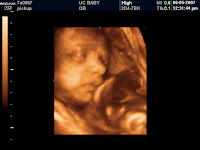 You may remember the 3-D ultra sound image of Erin at six months gestation I included in a previous blog entry this past June. It generated a lot of responses from readers asking if they could share it with others as an example of the dazzling new technology of chronicling life in utero. If you missed it, here’s another copy.

Although Erin made her grand entrance on August 21st, her humanity began long before that date. From the point of her conception, Erin became a member of the greater Human Family, just like we all did at the point we were conceived.

The human life journey is represented by words like embryo, fetus, newborn, child, teenager, young adult, middle-age, elderly and aged. Each phase is marked by physical and mental changes but the humanity of each individual remains intact throughout every stage.

The exact day a baby became a toddler is hard to pinpoint. It’s not when the baby takes his or her first step or necessarily when they walk. It happens almost imperceptibly. One day the parent realizes their baby is a toddler. It is the first of many realizations.

One day, years from now, when Erin is a mature adult, she will notice that her mother is growing older. Perhaps Erin will notice crows-feet lines around her mother’s eyes or the first hints of grey hair at her mother’s temples. Whatever it is, Erin will probably be saddened by the realization. She will undoubtedly wonder how she missed her mom’s signs of aging until that day. It seemed to happen overnight. But it did not. A gradual transformation was occurring all along, unnoticed (or denied) until then. It will bear silent witness to the fact that time is slipping away, even for Erin.

Protecting life journeys
Growth and aging are gradual and continual regardless of when it is noticed. They are the two constants every member of the Human Community experiences in their life journeys.

If there is such a thing as a human community to which we all belong (and there is), then each phase

of human development, each individual, must be protected and cared for by our mutual nurture of each other. Our collective embrace must encompass life beginning in the womb through to its end nearing the tomb. The greater human community depends upon it.

ncept is what the great English metaphysical poet and divine John Donne (1572-1631) meant when he penned those immortal words:

No man is an island, entire of its self; every man is a piece of the Continent, a part of the main; …any man’s death diminishes me, because I am involved in Mankind; And therefore never send to know for whom the bell tolls;
it tolls for thee.

To arbitrarily interrupt another’s life continuum is an assault on the greater community and weakens our bonds of interdependence.

Abortion is an abomination because it cuts off the possibility of a future, and the prospect of growth, for the particular individual in question. It is the preposterous presumption that an individual – just beginning its life journey – can be sacrificed because it will inconvenience another life further along the same continuum. Abortion is the denial of hope and interdependent community. Abortion weakens the bonds of the human community, and severs human connectedness for one life and frays it for another. The same is true about euthanasia of the sick or aged.

A year ago my 92 year old mother was dying of cancer. During the last few days of

her life she ate and drank nothing. She was unconscious. The nursing staff asked if the family still wanted meals brought for her. I said, “Yes” even though the meals remained uneaten, only to be taken away later. I did not want the routine maintained for my mother’s sake – she was unaware of the meals being brought – I wanted the nurses to continue bringing the meals for their sake. Even though it did not for my mother I believe it might have helped to refine the humanity of her nurses.

By going through the motions of bringing meals to an unresponsive, dying old woman was like making small stand against the notion that there is such a thing as care that is futile. There is no futile care, only futile treatments. Food and water are not medical treatment.

Today, my granddaughter baby Erin Marie came home from the hospital to the loving and ready home of her parents. I will do my small bit, as her grandfather, to help nurture her through her childhood to be a well adjusted young woman capable and willing to participate in the gentle art of human nurture to others she encounters.

The need for care and nurture never stops from the beginning of life until death arrives and the human journey is over.