MORE ABOUT MEN AND ABORTION 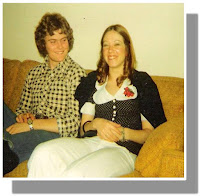 As I mentioned in my March 10th blog post called Men and Abortion, I gave an short address to a meeting of the Knights of Columbus in Edmonton (Canada). I spoke about them sponsoring a conference to help men affected by abortion. It cuts fairly close to home for me. I am one of those men.  In 1971, my girlfriend became pregnant with our baby. I pressured her to have an abortion; eventually she succumbed to the pressure and had an abortion. For decades I regretted my role in that abortion.

Was I the only man haunted by the dreams, the irrational sense of a foreshortened future, the sadness at lost fatherhood, the nagging desire to make things right and atone for my role in the abortion?(1)  Every time I would meet someone who was born in 1972, I would think of my son or daughter.  I suspected that I was not alone in my regrets.

For too long our grief has been discounted by mainstream scholarly discourse, media and establishment elites. But my grief was real regardless of conventional wisdom maintaining otherwise.

Yes, I suspected that I was not alone.
Then in 2007 I read an article in the Knights of Columbus magazine Columbia about a conference sponsored by the Knights in San Francisco for men of abortion. The conference was called  "RECLAIMING FATHERHOOD: A multifaceted Examination of Men Dealing with Abortion." I thought, "At last! There is a awareness surfacing of post-abortion syndrome in men. Our sorrow at lost fatherhood has been recognized thanks to the Knights of Columbus!"
Dr. Vincent M. Rue is a physiotherapist with more than thirty years experience treating post-abortion trauma. He is an expert in this field and was one of the speakers at the conference. Although Dr. Rue states that post-abortion grief transcends genders, in a later interview with Columbia he said that there are factors specific to helping men resolve emotional pain of abortion.


He recognizes that men are at a disadvantage because, as he said, "men must overcome cultural and psychological hang-ups about communicating feelings. ... Men need safe places to talk about their issues." (See his interview at http://www.kofc.org/un/en/columbia/detail/547671.html)

Apparently another conference was held in 2009 in Chicago for psychologists, counselors, clergy, academics and ordinary men and women who have experienced abortion. According to another Knights of Columbus article they "spoke out about what they say is an "invisible problem" -- men, as well as women, can have profound grief and suffering as a result of abortion." (See http://www.kofc.org/un/en/prolife/reclaim.html)
It is time for men who have suffered from post-abortion syndrome to be allowed to address their grief and move toward healing in this area of their lives. At a personal level, I found healing through a long and difficult spiritual journey that culminated in being forgiven by God, through His Son Jesus Christ. I laid my lost fatherhood of forty years ago at the foot of the cross. It was only then that I was able to truly forgive myself.

I know many brutish men have no remorse for their children killed by abortion. I am not talking about them. I am talking about men who suffer post-abortion trauma and grieve lost fatherhood. It is time their grief be recognized, not dismissed, and avenues made available for them to settle that grief within the context of community. I encourage more conferences like what happened in San Fransisco and Chicago.
MDP
(1) In the early years after being diagnosed with multiple sclerosis, I occasionally wondered if it was punishment for the abortion.
Posted by Mark Davis Pickup at 1:15 PM