"I AM EQUALLY PRO-CHOICE AND PRO-LIFE": CHRISTIAN PROFESSOR

During a November 4th 2014 university panel discussion in Indiana on the topic "Life versus Choice", Wesleyan Professor Gregory Fiebig stated "This is our belief, that life begins at conception. It is not the world's belief. And so if we start telling the world how to live their lives, and hold them to a morality that we believe, it's a little bit akin to playing the Holy Spirit."

No professor, you are quite wrong. It is a biological fact that human life begins when sperm penetrates egg. What anybody happens to believe does not change this scientifically established truth.


"...  the scientific evidence supports the conclusion that a zygote is a human organism and that the life of a new human being commences at a scientifically well defined “moment of
conception.” This conclusion is objective, consistent with the factual evidence, and independent of any specific ethical, moral, political, or religious view of human life or of human embryos." -- Dr. Maureen Condic in The Westchester Institute White Paper, "When Does Human Life Begin?: A Scientific Perspective.[1]

"For any sentient human to deny that life begins when sperm penetrates egg is to deny that the earth is round or that blood circulates." -- Dr. Bernard Nathanson.

One would expect better from this professor at a Christian university. Gregory Fiebig holds a Bachelor of Arts from the Southwest Baptist College, an M. Div., and a Ph.D. from the University Missouri - Columbia. And yet he comes out with such drivel, as quoted above. You can hear Dr. Fiebig's comments for yourself here https://www.youtube.com/watch?v=YRhgtVfwhxg#t=124


What Dr. Fiebig calls "cognitive dissonance" I call muddled thinking. He says he is equally pro-choice and pro-life.[2] What choice is he referring to? It is the choice to kill one's unborn child. To justify this unbiblical view, Fiebig tried to justify his comments in a subsequent letter in which he cites the Fall and the free will God gave to Adam and Eve. It's the old nugget I've heard many times before, dating back to the 1970s, by so-called "progressive" Biblical Christians to justify their support of abortion. They are not "progressive" in their thinking, they are regressive in their thinking. Child sacrifice dates back to antiquity. Whether various practices of sacrificing children in the ancient world,[3] or to appease Moloch the god of fire or aborting our children to appease the gods of lust, licence or self-interest, the slaughter of the innocents is barbarity and an abomination to any civilized people.[4]

Of course, all Dr. Fiebig had to do was read about the dreadful consequences of the Fall to which he alludes, or turn a few pages in his Bible to Genesis 4, to see God's response to the first murder. One wonders: If the blood of Abel cried out to God, does the blood of 55 million children killed by abortion also call out to God? Fiebig ignores the clear and unequivocal command not to kill, beginning with Exodus 20.13. Gregory Fiebig may respond by asking "But is abortion murder?" Yes, the killing of an innocent human being is murder. Former U.S. Surgeon General C. Everett Koop said:

"If life begins at conception -- and there has never really been any doubt about that -- then abortion is murder."[5]

Am I therefore saying women who have had abortions should be imprisoned? No, most made abortion decisions out of ignorance, pressure, duress or abandonment. Their abortionists should be in prison for murder!

Alas, I digress. I want to bring your attention to Dr. Fiebig's idiotic and appalling comments because he is in a position of influence in the education of young people at a Christian university. He needs to be challenged! I have encountered this sort of view from other evangelical Christians, who would find it impossible justifying from Scripture supporting the choice to kill ones unborn children. Fiebig should know better.

If Professor Fiebig was out of his element regarding the science of embryology, or forgotten his Scriptures and Christian history, then it is better to refrain from commenting rather than bring scandal upon himself and the good reputation of the Wesleyan university he represents.

Dr. Fiebig couches his tortured position for "cognitive dissonance" on a situation he and his wife found themselves with a crisis pregnancy of their 3rd child after two children delivered by cesarean section. The 3rd child was expected only 13 months after the second child was born.

He said they were advised by a "devout Catholic" doctor working out of a Catholic hospital they should terminate the pregnancy. Apparently the doctor told them that "if they saw the pregnancy through to the end, either she or the baby, likely both, would die." Fiebig then posed the questions: "How might you have advised the young wife? The husband? As a young woman, what would your response have been to the stark reality of facing your own death?" 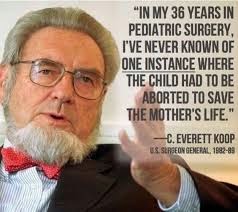 Quite simply, I would advise them  to seek a second opinion about their "reality", which they did. The new doctor told them "I've never lost a mother or baby in a case like this before, and I don't intend to do so now. Let me worry about the complications." Precisely. The first doctor's comments were not "reality" at all. It was, however, a convenient opportunity for Dr. Fiebig to take a swipe at Catholics.

Remember who you work for and to whom you are accountable to, Gregory Fiebig. The Christian Church has opposed abortion since the 1st Century in the midst of a hostile world.

______________________________________
Notes
[1] see http://bdfund.org/wordpress/wp-content/uploads/2012/06/wi_whitepaper_life_print.pdf
Also see See https://www.princeton.edu/~prolife/articles/embryoquotes2.html,
[2] A note of interest: While commenting on the word heresy, the venerable Biblical scholar W.E. Vine wrote in his EXPOSITORY DICTIONARY OF NEW TESTAMENT WORDS (Zondervan, 1981):
"HERESY. HAIRESIS denotes (a) a choosing, choice (from haireomai, to choose); then, that which is chosen, and hence, an opinion, especially a self-willed opinion, which is substituted  for submission to the power of truth, and leads to division and the formation of sects."
[3] Andrew White, M.D., "Abortion and the Ancient Practice of Child Sacrifice". See http://www.jesus-is-savior.com/Evils%20in%20America/Abortion%20is%20Murder/sacrifice.htm
[4] Most abortions are unnecessary. People who support abortion often bring up rape, incest and  risk to the mother's health. Yet if you add all three of these situations together, they account for less than 5% of abortions.
[5] The Standard magazine, August-September, 1984.
Posted by Mark Davis Pickup at 8:56 AM