We all can agree that every child should be wanted -- but you don't kill children to get it. Planned Parenthood would not agree. They are prepared to kill unborn children to achieve that goal; they have been doing that through abortion by the millions for decades. We still have unwanted pregnancies.

[Click on image below of https://www.youtube.com/watch?v=jjxwVuozMnU for Medical Director of Planned Parenthood admitting to selling fetal organs. 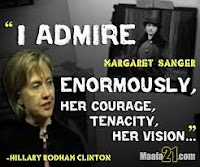 For more about Margaret Sanger, Planned Parenthood and their dark connections to eugenic history aimed at black genocide see "MAAFS 21 - Black Genocide in 21 Century America [a documentary on eugenics and genocide]" at https://www.youtube.com/watch?v=0eWxCRReTV4 . This excellent and exhaustive documentary is nearly 2.5 hours long but is worth your commitment of time to watch. It's an astounding eye opener.

You will find specific references to Hillary Clinton's racist hero

Thank you for a thought provoking article.