MOVIE REVIEW: "BECAUSE OF GRACIA" (and some comments about anti-Christian prejudice in education) 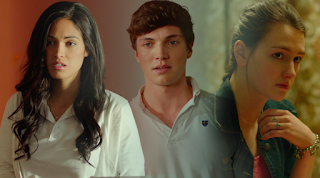 Because of Gracia is a film that makes me laugh and cry.  That effect never diminishes though I’ve watched it multiple times.  I think it’s because I relate to the characters in so many ways. Like Gracia, I’ve been pulled into debate. Like Chase, I’ve kept silent and regretted it. Like Bobbi, I’ve been ready to give up.  Like all of them, God is the only one who can give me hope.

Let me take you back in time a year, behind the closed door of my professor’s office. “Valerie, I need you to tell me that you will set your Christian identity aside,” my professor said. Fear and shock battled for precedence in my mind. This kind of thing only happened in movies like God’s Not Dead.  Yet there I was, faced with a choice: deny my God or deny my professor.

I was in a competitive entry teacher education program at the University of the Fraser Valley. Failing one course meant failing the entire thing.  The fear and shock diminished, replaced by confidence and peace.  Denying God wasn’t an option.  I explained to my professor that God is more important to me than anything else.  The first commandment says that we can’t have anything else above him.  So I can’t set my Christian identity aside.

I hoped my professor would understand, but she didn’t.  She was angry.  I started to cry because the whole situation was so bizarre.  In an email to my professor, I assured her my Christian identity would not hinder me from being a good and caring teacher for all students.  I asked her to explain what I’d done that was “too Christian” and what she expected of me in her class in the future.  She did not specify what she meant, nor what she expected.  She was sure I could figure it out on my own.  That lack of specific directions left me feeling like I was walking on eggshells for the rest of the program.

Later, my professor said, “Christianity needs to get brought down, and if it ends up below other religions for a while that’s okay.”  The fear was strong.  I said nothing. Sitting in class for hours every day hearing things that didn’t make sense, and things that shot arrows at the religion that was the foundation of my life was almost unbearable at times.  God heard my prayers and answered.

I realized how powerful and effective prayer is.  I can’t remember what I said at the Show and Tell assignment when I brought a Bible, but I know the words were definitely the right ones.  They were much better than whatever I had planned to say the night before.  To me, it was a miracle. A week later another miracle happened. In spite of everything I actually passed the course!

The program wasn’t over though. A few months later I was summoned to another meeting with a different professor.  It was regarding me using a medical statistic that my professor said created a toxic environment in the classroom. I felt like Bobbi Ryan, I didn’t know where to turn.  Life seemed to be an option between bad and worse.  I shared almost nothing in class for the rest of the year.  My professors congratulated me for my excellent participation.  By the time I graduated I was nothing like the eager, inquisitive girl I was going into the program.  It took time, but God is good, and He is the ultimate healer.

This September, an acquaintance of mine wanted me to share some of my experiences that were covered by several news sites, and even the National Post. There were hundreds of supportive comments.

The first time I watched Because of Gracia, I loved every moment of it. There was a bittersweet feeling at the end though.  Gracia in the movie got a victory.  Everything worked out for her.  There was a happily ever after, a chance to shine a big light.  I didn’t really have that — just memories of a scary university program.

The second time I watched it  I marvelled at how God can change things, how He can change me, how He can turn something dark into an opportunity to shine a light.

I was inspired during a dark time because of Gracia.  I think I’ll laugh and cry while I watch it no matter what my life looks like in the moment.

It’s a film I recommend to all my friends because it’s amazing. Film is a powerful tool for telling stories, and I am so glad that films like Because of Gracia are out there to be a lesson, an encouragement, and a light.