The Canadian province of Alberta is considering a bill to fully protect conscience rights of health care providers: Bill 207. Alberta physicians are not required to perform euthanasia (lethal injection) to patients meeting the criteria laid out in Canada's Medical Assistance in Dying (MAID) legislation.  But many Christian doctors are afraid they might be compelled to refer suicidal patients, who meet the legal criteria for MAID, to physicians who are prepared to kill them. Who might compel them to refer? Perhaps the Alberta Medical Association—much like the Ontario Medical Association has done, or some other regulatory body. Bill 207 would simply protect Alberta doctors from that possibility. The bill is being met by the usual suspects from the progressive looney left of the New Democratic Party (NDP) and their allies.

The NDP want doctors who refuse to participate in euthanatize to be compelled to refer patients to killer doctors who will—which makes them complicit in their patients' suicides.  This is abhorrent to many Christian (and Muslim) physicians. They believe euthanizing people or assisting in their suicides (which referral is) is a grave sin (pardon the dreadful pun) has eternal consequences.

Section 2 of the Canadian Charter of Rights and Freedoms guarantees of freedom of religion, thought and belief, and the expression of personal beliefs. Expression does not merely involve what one says but also involves how he/she behaves.

Over the next few days Bill 207 will be examined by a legislative committee comprised of United Conservative (UCP) and New Democrat (NDP) MLAs. I expect the UCP MLAs to rightfully deal with conscience rights (which is what the bill is about) and the NDP to focus on bogus access issues. It's bogus because there are plenty of amoral doctors willing to engage in euthanasia. If the bill passes—which is uncertain—access issues can be addressed by such things as signage in doctor offices stating which physicians at the clinic do not provide euthanasia or referrals. In hospital settings, scheduling can ensure killer doctors are available or on call for lethal injection requests.

Leave pro-Life doctors (and nurse practitioners) to practice medicine in peace, without fear of being forced to provide euthanasia referrals. That's what Bill 207 would codify into law: Reassurance, peace of mind, and protection for health care providers now and in the future. I don't think that's asking too much.

Below is a poster advertising a conscience rights and duties lecture being held at Saint Joseph's Basilica in Alberta's capital city of Edmonton tomorrow. I trust the speakers will not contradict or offend Catholic teaching about euthanasia, suicide, proper end of life care, or murder. I'm sorry for the short notice but it only came across my desk by email this morning.  -- Mark 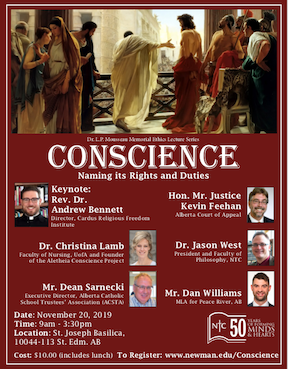