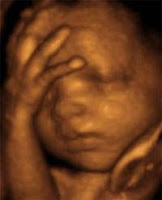 Lies and deception are the backbone of abortion advocacy. The realities that science and biology have established about prenatal life -- its beginning and development must be suppressed or denied. It should be noted that much of our knowledge about life in the womb was known long before Roe v Wade or Canada's 1969 abortion law. Abortion facilities must try to keep women as ignorant as possible about what abortion really is. People who dare publicly stand against abortion are regularly vilified, maligned and attacked, by a desperate abortion establishment. (See previous post.)

One infamous abortion clinic in Rockford Illinois (the Northern Illinois Womens Center) is the epitome of this. Copy and paste to your Internet http://prolifecorner.com/node/862 to read comments by a local pro-Life group. 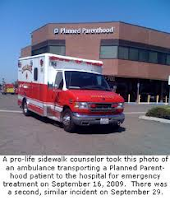 [In recent years they have tried to shed the unsavoury label of abortionists with its seedy connotations of baby killers and being dangerous to women. Abortionists have begun to refer to themselves as abortion providers to try and present themselves in an altruistic light.]

The NIWC in Rockford illustrates that legalizing abortion is no guarantee of cleanliness or respect for women's health or ensuring they make fully informed decisions. Copy and paste http://www.prolifecorner.com/node/526

If you copy and paste http://www.lifedynamics.com/Pro-life_Group/Pro-choice_Women/ and click on the Blackmun Wall link you will see a litany of women who have died by the supposedly "safe legal abortions" in America since Roe v. Wade.

My wife worked directly across the street from a Canadian abortion clinic. She often saw ambulances pulling up to the facility to rush women from the abortion clinic to a hospital. Safe abortions? Of course this was never reported by the press.

Was/is such consistent silence a wilful act by an abortion friendly press to perpetuate the myth that abortions are safe? The media are always quick to deny bias but the public is left to wonder? The advent of new social media has broken the grip traditional media have now on what is reported and not reported, and how things are presented.

A number of years ago, a timid OBGYN told me quietly that after the only abortion clinic was introduced into the Canadian city where he worked the number of women with perforated uteruses, and other complications from abortions, arriving in hospital emergency wards from the abortion clinic skyrocketed. Again, that was never reported and my timid gynecologist friend would never say such a thing publicly for fear of media criticism. He had a thriving medical practice to protect. Poor man. His spine was so thin you could pass your hand through it -- but his wallet was so thick he sat crooked.