I have a memory of  the day my grandfather died in 1962. My father came home from the hospital where my grandfather was being treated for what we thought was a relatively minor ailment but he unexpectedly died.

I was waiting at my grandfather's house with other family members when my dad came in the door. In his typical WASP way he told us that Granddad died then went to the basement of the house. We were stunned!

I sneaked downstairs and heard my father moving about in a small bedroom at the back of the basement. Slowly I opened the door and said, "Dad? Are you okay?" Looking away to hide his face, he absently fidgeted with something on the top of a dresser. He cleared his throat then replied "I'm okay son."  The air was thick with emotion. I dared not speak for fear of crying. Finally I was able to muster the words "I'm going to miss him, Dad." My father turned and looked at me; his eyes were brimming with tears, his lips trembling under his mustache. He whispered "Me too," then completely broke down and started weeping. I ran to him. We hugged and cried. He wept for his father (and I wept for him) but mostly I wept for my dad in a grief I could not assuage, but could only try to comfort him in as much as was possible for a boy of nine.

Something heartrendingly beautiful happened in that room. Our father-son soul-bond deepened. In an embrace of a few moments we experienced a sovereign unity of two broken hearts beating as one. It was as close to divine love as I have experienced before or since. Eight years later my father would die but there would be no unity of hearts. One ceased to beat.

In 1994, I watched the movie Shadowlands, a love story about C.S. Lewis and Joy Davidman who died of cancer in 1960. C.S. Lewis was brilliantly portrayed by Anthony Hopkins and Debra Winger as Joy Davidman. There is a scene near the end of the film where Lewis and Joy's son Douglas are in the attic of Lewis' home shortly after Joy's death. When I saw the scene it reminded me of my own experience I described above. There are obvious differences, of course, but the point where grief breaks through into sobs of sorrow (2:44 in the clip below from the movie) opened my little grey memory cells of thirty-two years earlier with my father.

What's my point? Do not fight it when it's your turn to grieve. Grief is universal to the human experience. It will touch us all.  Granted, it is excruciatingly painful but is also as natural as air after a major loss. Tears are constructive and necessary. Suppressing or avoiding grief can result in destructive behaviors and acting out (as it did to me after my father died). 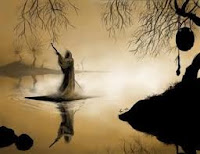 We must enter our own river of grief and venture across to the opposite shore in search of acceptance and hopefully a dawning of recovery that subdues the stabbing pain of grief.

[Click on image below or https://www.youtube.com/watch?v=B_QDoHsdSTg for the grief scene from the 1993 movie Shadowlands.]

*The title of this post is a take-off on C.S, Lewis book A Grief Observed, his eloquent journal chronicling his inconsolable grief journey after his wife's death.

Posted by Mark Davis Pickup at 5:35 AM