IN CHRIST, OUR SUFFERING WILL ONE DAY MAKE SENSE 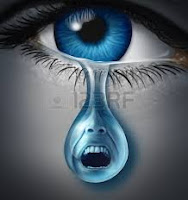 When I met Moira (not her real name) she was completely broken-hearted. As the old song says, “I can tell by your eyes, you’ve probably been crying forever.” That was Moira.

This forty-two year old mother had developed severe chronic progressive multiple sclerosis which put her into a wheelchair within a year of her diagnosis. Moira’s husband left her and their only daughter went with him. She had nothing left she cared about and she wanted to die. The curtains in her darkened apartment were drawn to shut out the daylight – like a sad metaphor of what her life had become. What could I say to comfort her? Moira was inconsolable. Her dreams had come true for a brief period of time then were snatched away. The loss in her body paled in comparison to the loss in her heart.

Why do I share this with you? There are millions of people like Moira in the world. Their hearts have been crushed by lost health, lost love, and lost dreams. The beating of a broken heart is a tender thing that needs the soothing balm of loving care from those around the individual filled with sorrow.

For those who grieve, there is a God who understands. Christ’s heart was also broken. He wept too and knew sorrow: “My soul is overwhelmed with sorrow to the point of death.” (Matthew 26.38.) He knew what it was to feel abandoned: “My God, my God, why have you forsaken me?” (Matthew 27.46.) He knew the feeling of being homeless: “Foxes have their holes and birds of the air have nests, but the Son of Man has no place to lay his head.” (Luke 9.58.) Jesus knew excruciating physical pain as we see with His Passion and crucifixion. There is no anguish that Christ does not understand. We can approach him with confidence. I know this from personal experience.

Throughout thirty years of incurable and generative disease I have continually called out to God in my physical, emotional and spiritual anguish. At my lowest points Christ has sent his consoling spirit to comfort me. (Perhaps that’s one reason why the Holy Spirit is also referred to the Comforter.)

I wish that Moira had turned to Christ in her sorrow. Maybe she eventually did, but I haven’t seen her in years. Moira had a special opportunity to grow spiritually through her anguish. It is often through suffering that humanity is offered the prospect of transcendence. But what sort of transcendence?

Christ offers us the possibility of transcending ourselves and our situations, if we are open to His leading, and completely trust Him.  It is hard. I also know from experience the struggle between fear and faith. The question is this: Which will prevail?

This is something Jesus struggled with as He entered his Passion at the Mount of Olives. In his prayer, he was horrified at the physical destruction that lay before him.  Pope Benedict XVI addressed this in his book, JESUS OF NAZARETH:  HOLY WEEK:  FROM THE ENTRANCE INTO JERUSALEM TO THE RESURRECTION (2011):

The Pope tells us of the struggle between two wills found in Jesus’ prayer. There is the “natural will” that resists the “appalling destructiveness of what is happening and wants to plead that the chalice pass from him; and there is the “filial will” that abandons itself  totally to the Father’s will.” (see p.156)

In a lesser way each of us who are confronted with suffering also has a struggle between our two wills. We have the natural will that recoils at the inevitable “appalling destructiveness” of disease, progressive disability, or old age. Then there is the “filial will” as children of God ― a desire to follow our heavenly Father in childlike trust and expectation of his joy and the divine that lies just beyond reach in our earthly state.

love of eternity. It has been there since earliest childhood. It is there because God put it there. I think this is what is meant in Ecclesiastes when it says that God “has put the timeless into their hearts, without men’s ever discovering it, from beginning to end, the work God has done.” (3.11.)

Suffering has the capacity, if we let it, to intensify that yearning for the perfection of the Eternal. It is not a desire for death, rather a desire to see the face of God. It will be then, in His perfect love, that all our earthly suffering will make sense.