A PRINCESS AND A SAINT

On August 31st, 1997, Princess Diana died in a tragic car accident at the age of thirty-six. She was fleeing from the constant hounding, hounding -- the incessant hounding of photographers. Who can forget the dreadful images of the Mercedes Benz twisted and wrecked in the Paris tunnel on Pont de l'Alma road? Even as the princess lay dying in the back seat of the car, the paparazzi kept their cameras flashing. I consider them responsible for her death. 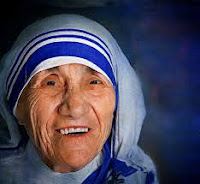 I fired off a fax to CNN challenging Savage. Who did he -- with his expensive suit and blow-dried hair -- consider to be the world's poorest of the poor? To the credit of Mr.  Savage immediately called me at my house and apologized, saying he was simply reading what was on the teleprompter. Okay, mistakes happen, but who wrote those words and with whose approval?

The nasty, anti-Christian writer, Christopher Hitchens called Mother Teresa a “mediocre human personality.” He said, “She was a fanatic, a fundamentalist, and a fraud”.[1]  He was a vicious man. Hitchens occasionally appeared on CNN and other television networks to spew his vitriol around the globe.

Jesus’ standard for greatness was obviously different than Hitchens’. Christ said, “The greatest among you must be your servant.” (Matthew 23.11, also see Matthew 21.25-27.) That's what Mother Teresa was.

Mother Teresa epitomized what Christ meant when He prayed, “I gave them your word, and the world hated them,t because they do not belong to the world any more than I belong to the world.” (John 17.14)
A Princess and a saint
A princess and a saint: One lived in extravagant luxury, the other lived in austerity. One reached out to those in need while the other lived with those in need and gave her life to them. One was the people’s princess while the other brought humanity’s poorest the divine love of the King of Kings.

The world was made poorer with the tragic and premature death of Princess Diana. The world was made richer by Mother Teresa’s life of Christian service and obedience to God, which came to its natural conclusion on September 5th, 1997.

None of us knows when our lives will end. Make your life a beautiful gift to God and humanity. Very few of us will ever be royalty but we can all serve the King.