The rainbow does not mean what it has come to symbolize on recent years. Throughout the ages, beginning in the ancient mists of antiquity, the rainbow has been a symbol of God's covenant with the earth and its inhabitants.

Since early childhood, I have been enchanted by rainbows. I did not believe there were pots of gold at the end of rainbows; no, I thought that if anybody was ever able to find the end of a rainbow they would find eternity. After all, rainbows were created by God. I was taught this by my father who read me bedtime Bible stories. We read in the book of Genesis, that God told Noah:

Rainbows are God’s reminder of a loving covenant of hope He gave to the world.

Children instinctively rejoice when they see rainbows. It’s natural. They have not lost the ability to dream ― their imaginations soar so easily. Adults can occasionally experience a brief, fleeting hint of child-like joy when they unexpectedly encounter a rainbow after a violent summer storm. Perhaps that’s why so many poems and songs have been written about rainbows.

Why are there so many songs about rainbows,
And what’s on the other side?
Rainbows are visions, but only illusions,
And rainbows have nothing to hide.
So we’ve been told and some choose to believe it,
I know they’re wrong wait and see.
Someday we’ll find it, the rainbow connection,
The lovers, the dreamers and me.

Many years ago my mother died on the same day that my daughter, son-in-law and three grandchildren moved away from our small town. It wasn't intentional, just coincidence. My mother had been in palliative care for sixth months with brain cancer; my daughter's family also had been planning to move for six months. As a small mercy, God kept me too busy accompanying my mother through her last months to think about my daughter and her family moving away. It just happened that my mother died and the move happened on the same day.

It was a sad and lonesome day, or as my little granddaughter would have said, I was “sad and noney.” Yes, sweetheart, and I cried 'till there were no tears left. A hearse and moving truck marked that day. Then, my sadness of that day was punctuated by a thunder storm.

When it passed, I drove my electric wheelchair to a small lake near my house. I needed to alone to think. A rainbow appeared in the distance and my eyes filled with tears. It was as though God was saying I am here with you.

American Poet John Vance Cheney (1848-1922) wrote, “The soul would have no rainbow had the eyes no tears.”  I began to understand what he meant.

Who said that every wish would be heard and answered
when wished on the morning star?
Someone thought of that,
And someone believed it,
And look what it’s done so far.
What’s so amazing that keeps us stargazing?
And what do we think we might see?
Someday we’ll find it, the rainbow connection,
The lovers, the dreamers and me.

Throughout the following autumn, on sleepless 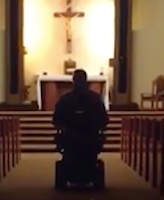 nights, I often laid in my bed wishing my daughter and family would return. I would sneak up the hill from my house to the church and sit in the quiet Sanctuary. I prayed before the Blessed Sacrament that my grandchildren would move back with their parents.

It could not be, and I knew it, but it broke my heart just the same. My prayers were answered by silence. Silence was the answer. I was not supposed to let my heart stay there. It was time to move on.

For the last decade, I have learned to be more attentively to my interior life. Thomas a Kempis said:

"O God my Truth. ... The more we are united to You and become inwardly simple. the more we can, and effortlessly too, understand sublime things about You, for we receive light and understanding from above."[1]

The most important and real truths are seen with the heart, not with the eye. A rainbow is not real ... and yet there it is for all to see. My sorrow was real; it could not be seen, only felt. That's the price we pay for love. Anguish within anguishes is part of my journey home.

God's love is the source of all eternal joy. For now, we only get brief inklings or longings for something else. The rainbow is God's covenant creation that has eternal love at its foundation. His love is my rainbow connection. Christ waits on the other side of my rainbow.